Two separate thoughts that have been in my head today.

1. I miss Vince Scalabrino. This is his actual name, and he doesn’t know I’m using it here, because he doesn’t read this, and indeed we haven’t spoken in years. Vince, who I knew in college, was my most dependable actor; a talented, earnest individual who genuinely understood not only my scripts but my direction. Danielle knows who I’m talking about, and I think Hannibal does too. In any case, with “Accolade” now in pre-production, I find myself missing Vince because the male part in the two-person play is almost tailor-made for him. I have no doubt that, if I could find him, and if he had the time and inclination, he would be superb in the part. Alas, as I said before, I haven’t seen him in years, so my director must go and find his own actor to complement Donna. 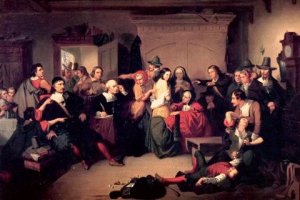 2. I’ve decided that organized religion and faith in God is a substance so powerful that it can only be wielded safely by a small percentage of the human population, in the same manner that only King Arthur could wield Excalibur, or only Odysseus was strong enough to string and shoot his longbow. And in these people, the sheer spiritual power makes them beautiful, makes them radiant–Nusrat Fateh Ali Khan, the late, great Sufi qawaali singer, was one of these.

Everybody else goes mad. This is my theory. If you are not built to handle the demands that true spiritual faith entails, then you simply go mad. You went to the religion expecting it to transform you, and when it didn’t, you pervert the religion to serve your own needs, you make it over in your image. Religious extremists do not kill because their religion demands they do so; indeed, no religion demands murder, they do it because it makes them bigger. Not knowing how to utilize faith’s internal rewards, or unwilling to accept that such rewards are merely internal, they create external circumstances that gather to them external attention. They blow up buildings because it gets them the power they really wanted all along.

Today, the news told me about an 11 year-old boy who was severely beaten by two pastors for inadequately studying his Bible. It told me about al-Qaida spokesmen planning more bloodshed, it told me about yet another death in the so-called Holy Land. And I tell you, it drives most people mad, because I can’t think of any other explanation.

This entry was posted on July 10, 2002 by bilaldardai in News of the World, Plays, Theatre.