Despite our protests, the bastard kept shaking the globe. 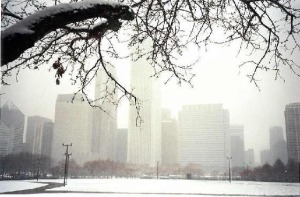 Snowing severely in Chicago for the third time this week [1], in what seems to be this winter’s almost Dubyaesque overcompensatory desire to prove that it’s Not At All Like Last Winter. While snow is an enjoyable sight that holds a few special meanings for me, it’s also both cold and wet, and, like constrictor snakes, best experienced from behind firm glass.

I have too much music. In and of itself, I like the size of my CD collection, because it’s good to have much music available to one. There is also the nagging rationale that, at some point, I may desire to listen to something I haven’t listened to in ages, or that I may find some heretofore unconsidered usage for the songs that appear on the Guided By Voices EP for “The Official Ironmen Rally Song [2].” At the moment, I’ve decided that it’s high time for me to start working my way through the CDs I scavenged from the many left behind by my former roommate, and as such, I’ve started with the two CDs that help complete my Radiohead library [3].

Description I said out loud this morning to remember for future reference. On the train, friends and I noticed a photograph updating us on the career of Bob Sirott, late of several Fox “News” [4] programs, including the lamented-if-only-because-of-the-catchy-title, “Fox Thing In the Morning.” Sirott rather creeps me out, but I’m not sure quite why. At one time, I think I felt slightly charmed and endeared of him, like I used to for John Stossel of “20/20” before it became clear how poor a journalist he was [5]. Anyway, I found myself spouting the following about Sirott:

“He’s kinda creepy, isn’t he? He’s like that court jester who’s been slowly going mad, and one day he’ll take over the kingdom to remake it in his own clowny image.”

I like that. I do believe I’ll find a place for it, somewhere, about somebody else.

[1] No small feat considering that the week is only three days old.

[2] My big thing with music is that I imagine being in positions to use it alongside dramatic endeavors. I like my house music to be unique and yet ever-so-fitting. I worship the work of Chris Tergesen, who for seven seasons of “Homicide: Life on the Street” found both creative situations for overplayed pop songs [6] and found little-heard songs to place in exactly the right moments of the show. And such, I hold onto even those songs I would never imagine myself listening to that often.

[3] When I think of it, I can only think of three musical acts whose entire catalog of LPs–and I define “catalog” to mean that they have more than two to their name–I currently own: Soul Coughing, Morphine, and with the addition of “Pablo Honey” to my collection, Radiohead. I would include Tori Amos on this list, except I have yet to pick up her latest, for issues of money.

[4] This is a habit of my friend Rick [7], putting quotes around the word “News” anythime we speak of the Fox Network’s particular news programs. I have adopted it because I find it apt. Also, it reminds me fondly of the early days of the Fourth Channel, when David Letterman would consistently refer to “The Fox Network” in his monologues and punctuate the mention with a burst of hysterical laughter.

[5] For the record, my two favorite journalists are Mark Bowden (“Black Hawk Down,” “Killing Pablo,”) and David Simon (“Homicide,” “The Corner,”), with a memorial nod to Randy Shilts (“And the Band Played On.”) Note that none of these are television personalities. The best nonfiction writing is just that.

[6] Rick [7] once referred to HLOTS’ use of the Goo Goo Dolls’ “Iris”–as the background music during a split scene showing two teenaged lovers being carted off to separate prisons–as “so much better than the actual video they made for it.”

This entry was posted on December 3, 2002 by bilaldardai in Chicago, Music, News of the World, Writing.