That comes out of your pay, Cratchit.

Christmas Eve in the office and there are but four of us here. I’m only here because I said I would be, and as such, my manager left a few things for me to do. Even then, I’m only staying until eleven or so.

Royally ticked at my mother today, but that’s about all I can be about it. She has intensified her attempts to control my brother so that, for Godsakes, he doesn’t Turn Out Like Me, and it’s gotten to the point where she’s given him a 10 pm curfew and all but forbidden him from participating in extracurricular activities, lest he become corrupted by the decadent Americans [1]. Never mind, of course, that she also wants him to get into a good college, and that such good colleges also look at one’s extracurriculars to find a well-rounded (read: not suppressed and molded by their mothers into single-minded religiosos) students.

There was a documentary on PBS last Wednesday about the life of Muhammad, and the origins of the Islamic religion, that my mother asked me to watch in her ongoing campaign to bring me back to the faith, based on her belief that all one needs to convert–or revert, I suppose–to Islam is education on the topic. Despite this, I am in the process of watching it, because it’s a very well-done documentary, narrated by Andre Braugher, and because I think far too many people remain ignorant about this religion that has within its communities pockets of people who want to Kill Us. And I won’t be one of these ignorant people.

Discovered a few things about myself while watching it, and a few things about my mother’s community. Essentially, many of Muhammad’s principles–humility, charity, tolerance–are principles that I feel I either have or would like to have more of. In effect, I have no problem following the example set forth by Muhammad. One is told that to serve God, one must serve his fellow man, and this is not a bad thing. Islam was born in a hotbed of violence, tribalism and material culture. Muhammad asked his people to forgo material wealth for spiritual riches, to treat all of humanity as one’s brother and sisters.

So what the hell happened?

I’ve noticed that even in my parents’ community, that this example has been pushed aside in favor of cultural conservatism. My mother can’t stop talking about how embarassed she feels when she knows that I can’t afford a new car while my cousins can. She pushes things like salary requirements at me. Without realizing it, she’s become one of the worst sorts of Americans; she’s become a materialist. And her community pushes her to it, since there’s an arrogance attached to many of the successful. In rural Pakistan, you still have tribal atrocities, but now they’re being committed in the name of the religion that originally ended tribalism. 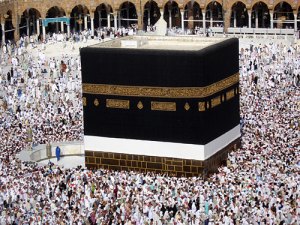 So am I a Muslim? Strictly speaking, no. But at the end of the day, I try to follow the Prophet’s example, not the examples of those who practice the religion today. The Islamic community where I grew up has forgotten that one of the tenets of the religion is that you seek to bring justice to the world. Thy’ve become more concerned with circling the wagons, with wallowing in their status as some kind of superior Other–the unity within the Islamic community occurs for its own sake, when what they should be doing is speaking out strongly against those who misinterpret the Qur’an, who kill in its name. Last week, Republicans forced themselves to push past the desire to remain unified and removed Trent Lott from power, in the best interests of themselves as a party. Muslims should be prepared to do the same [2]. They should be prepared to dismantle the madrassas, they should not sit quiet and idly by when one of their own expresses support for the vile tactic of suicide bombing. They cannot condone hate. Hate and anger are taught to be haram in the faith, and among other things, it negates your prayers to feel these emotions. A zealot can pray five times daily and spend the rest of his time reading the holy book, but the second he expresses a desire to kill, he’s just negated it all in the eyes of Allah.

Religion and culture were meant to be integrated in the Islamic countries, but culture, sneaky bastard that it is, proved to be stronger, and now holds the ideals of the Islamic faith hostage to its will. Religion is personal. Faith in God is a matter of internal feeling, not a question of dogmatic ritual. One’s deeds are relevant, but their intention is also relevant. One cannot kill and corrupt, one cannot hurt others, one cannot express intolerance for others and pretend that they still serve a higher power. It’s ridiculous to act as such.

One last thing, if only because I find this funny. Somebody mentioned in a recent interview that the translation of the Qur’an which states that a martyr will receive 72 virgins in Paradise is actually incorrect. The word “virgin” is mistranslated, the word actually means “white raisins [3].” I can only imagine how upset the 9/11 hijackers were, since (a) I don’t have the ability to look into any version of Heaven, and (b) the cold evil fuckers didn’t go there anyway.

[1] My mom’s Christmas party featured a visit from three of her supervisors, who apparently showed up sloppy drunk. My mother works with nineteen year-old unwed mothers, nurses who come in late wih hangovers and people who have been fired for drug use. As is my mom’s temperament, she looks upon these people as examples of all Americans, so now my brother can’t be seen hanging around with them.

[2] So should liberals, for that matter. Far too many liberals go off the deep end and then accuse anybody who tries to stay centrist–Bill Clinton’s Third Way–as being traitors. Newsflash to the left–You’re Not Always Right. Often, perhaps, and your intentions remain pure, but be reasonable.

[3] I have no idea how these would taste. One can only assume that they’re really, really good.

This entry was posted on December 24, 2002 by bilaldardai in Life, News of the World, Politics, Thoughts, Work.