Incorrect equation for a handshake. 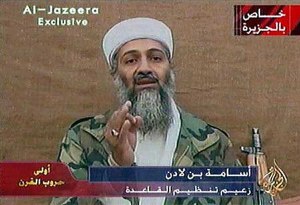 The administration is grasping at straws again, trying to build a connection between Saddam and al-Qaida that so far they’ve been unable to adequately prove.

So a voice “believed to be Osama bin Laden’s” may or may not be broadcast on al-Jazeera sometime soon, even though al-Jazeera producers–not the most trustworthy people, to be fair–say that rumors of such a tape in existence are just that.

Regardless of whether the tape does or does not exist, the logic that Powell is being made to parrot to the United Nations doesn’t hold water. One might even, in a moment of cheek, be willing to refer to it as “fuzzy.” Even if bin Laden were to express his sympathy and support for the Iraqi people against an American invasion, it doesn’t prove that Iraq is tied to al-Qaida anymore than Amnesty International is. A handshake requires two parties.

One of the few things the Palestinians have done correctly during these bloody years of their out-of-control infitada is to have allowed even a brief soundbite, addressed to bin Laden, telling him to stay out of their problems. We don’t need you. We don’t want you. We don’t agree with you.

Good for them, I say, although it would grant them much more credibility if they stopped encouraging their friends and family members to detonate themselves in public places.

This entry was posted on February 11, 2003 by bilaldardai in News of the World, Politics.