Two years ago, the republic of Macedonia announced itself as a major ally in the war on terror, when it performed a successful attack upon an al-Qaida terrorist cell, an attack that killed seven Pakistanis who had been living in the capital city of Skopje. A great victory against the enemies of civility and free societies, yes?

I do not Blame America First, despite the quick-and-dirty label that is so often applied to those of us who decide to ask harder questions about America’s role in its own calamities. I do not think thousands of people deserved to die on 9/11, nor do I think that everything that goes wrong in the world is a direct result of American influence and action. 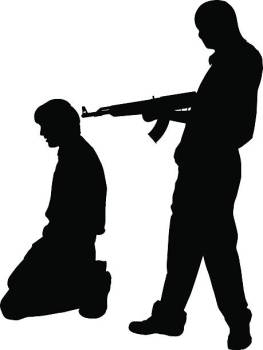 But this, this sick tale of political intrigue and coldblooded murder unraveling in Macedonia, cannot simply be dismissed as an isolated incident unrelated to our own agenda. I will not say that the Bush administration necessarily caused these seven men to be lured to their deaths, but I will not absolve them of all responsibility, either.

Bush has made it clear that under his stewardship of global power, the map of the world is divided between those who stand with us against the terrorist threat and those who stand with the terrorists. Abstaining is not an option; lack of immediate and decisive action is tantamount to collusion. The rewards for proving oneself as an ally are many and varied; the punishments for arguing against, for example, invading Iraq, are also many and varied.

So bear this in mind: Macedonian officials gunned down seven innocent men and named them a terrorist cell because they were trying to impress us.

And assuredly, we were impressed.

The war against terrorism is a war against the idea that secular, Western-style democracies are inherently corrupt and worthy of any action required to destroy them, as well as all those who choose to enjoy living under such a government. The main point of the Islamic extremist sermon is that America and its allies lack spirit and humanity, and as such cannot be considered human. And as such can and should be executed with all the regard one would hold for slaughter animals. The longer this idea has even a shred of credence, the longer any war on al-Qaida will take.

In other words, incidents such as this, or the more high-profile story of American soldiers torturing Iraqi prisoners, Do Not Fucking Help.

I am waiting and hoping for a very clear, strong rebuke of the monsters who perpetrated this crime, and a supplemental statement that declares that our friendship cannot be bought simply by parading bodies in front of our faces.

I wait and hope, but do not expect.

This entry was posted on May 17, 2004 by bilaldardai in Essay, History, Politics, Uncategorized.