Soundtrack of My Life. (Tom Waits) 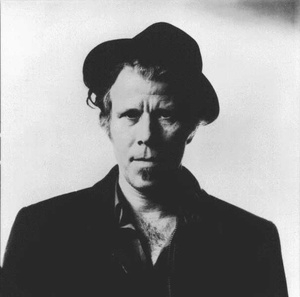 I’m aware he’s Californian, thank you. But he has always sounded like New Orleans to me.

But I’ve never been to New Orleans. So I’m probably wrong. And now I may never get the chance to correct the misconceptions.

It’s not just his much-celebrated vocal stylings, once described as being “like it was soaked in a vat of bourbon, left hanging in the smokehouse for a few months and then taken outside and run over with a car,” it’s the way he mishmashes jazz and ragtime and the 12-bar blues, tossing in almost any sound he can find to make music. It’s the inherent darkness of his stories, the sadsack characters within who may or may not just be looking for love, but who instead find misery and death…and sometimes they’re just satisfied to have found anything at all. His music comes from a humanism that has all but lost any sheen, a humanism that says life is sweet but life is suffering, and sometimes life is sweet sweet suffering. He is not always himself. Sometimes he is Frank, sometimes he is the sailor going to Singapore to shake sin out of the trees, sometimes he is the mortician, performing his own autopsy and then taking the show on the road. He is the direct descendant of Chaucer, if Chaucer had spent a month rooming with Poe and then gotten into a big fight with him, culminating in gunshots fired and a bar brawl of epic proportions, until at last they sat out on the street, taking turns blowing into a discarded trumpet and trying to remember the name of the girl who had gotten them so hot and bothered in the first place.

Tom Waits’ music is by turns clever, passionate, grimy, deadly, drunken, sober, demonic, shifty, and your best friend in the whole world, the kind who gets you into life-threatening trouble with crooked cops and then makes damn sure that at least you come out of it alive.

His music is that of my romanticized, long-lost New Orleans. The inhabitants and those who actually visited will remember other things, and I will not pretend that my false imaginings are in any way able to approach their tactile sensations.

It is, nonetheless, all I have. And it sounds like Tom Waits.

This entry was posted on September 2, 2005 by bilaldardai in Critique, Music, Soundtrack, Travel.