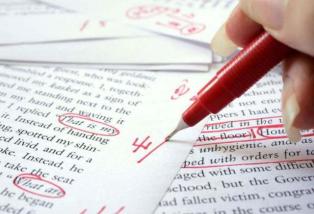 In the murky mires of my self-confidence, the Revision Process is the skulking ghoul that my Creative Process only speaks of in hushed whispers. Something so oblique and terrifying could not possibly be real, except how to explain all those sentences and plot points and character traits that went wandering off into the fog one night and were never seen or heard from again?

Revising, for me, is akin to the Kubler-Ross Grief Stages, in that I follow a similar emotional path:

Denial — There’s nothing wrong with this play. It was written perfectly the first time. I try not to commit anything to paper until I’m sure that it’s exactly what I want to say, and logically, that means that this play is exactly what it was intended to be.

Bargaining — Okay, I see how that line could be tighter. But the thrust of the scene itself is still perfect, wouldn’t you agree?

Depression — Criminy, this play sucks sour frog ass. And I just wasted several months of my life writing it. What a waste. I’m going to shove it in a drawer where nobody can see it. And maybe one day, when I’m penniless and freezing to death on the streets, I can burn it for warmth or wallpaper my cardboard box with it.

Beyond that it starts becoming exciting again; like adding improvements to a rollercoaster. An extra twist here, a faster descent there, a line of rotating knives here and the part where the ride takes you right by the mouth of hell. Did I mention that this metaphorical rollercoaster can’t be covered by any insurance policy?

Tuesday night was the first night in awhile that I brought something in to TML rehearsal that I wasn’t happy with before I proposed it–a 90-second thing called Snakes on a Play!. It was somehow very refreshing to spit it up anyway and let it wriggle on the floor like a matter transporter accident, and it became worth all the ugly discomfort when, with the help of the ensemble, I managed to reshape it into something I’m feeling much better about putting up this Friday.

At most recent glance, I will be changing at least 70% of the lines in Vox Pandora by the time it goes up next April. I will likely remove some of the more superfluous details from the stage directions. I may even try again at writing an original 1950s doo-wop song, instead of the surrender I eventually placed into the script.

And at the moment, that doesn’t fill me with dread. Yes, a large group of words and phrases are about to enter the mist and be eaten alive, but some are going to come out the other side and find themselves stronger for it.

This entry was posted on May 18, 2006 by bilaldardai in Action Items, Mental Health, Neo-Futurists, Plays, Theatre, Writing.