I’m unsure, to this day, what exactly it was that marked me as a target in elementary school–although it could have been any number of things. I was the kid in class who could spell and knew long division in second grade, which either endeared me to kids wanting to copy my homework or spotlit me as some kind of curve-breaking teacher’s pet (although we weren’t actually graded on a curve). It could have been that I was the short, awkward, fat kid in glasses; which is akin to donning an antelope suit and wandering about the African savannah. It may well have been race and religion, although as I was one of very few minorities in the very small school to begin with, I tended to feel more like an object of curiosity than of derision. In hindsight, I think I looked at myself much the same way.

I’m unsure what factor or combination of factors were most influential on turning me into prey, but I recall being shaken down for lunch money and having rocks thrown at me when I biked by a certain house in the neighborhood.

In junior high I discovered wit. I discovered that if there was never any chance you could outfight a bully physically, the least you could do was make him look like an idiot as he slammed you up against the lockers. It’s not that making him look like an idiot would keep you in one piece. It’s that it gave you a small measure of satisfaction that you could take comfort in, instead of retreating to a place of mind-numbing terror. Bonus points if you landed the clever rejoinder in front of people–it made them more likely to hang out with you in the future, and one always finds safety in numbers.

Here’s the point of this otherwise pedestrian therapy monologue: At some point, I think, I may have become addicted to it. Not the being bullied, but landing some sort of cutting witticism in response. 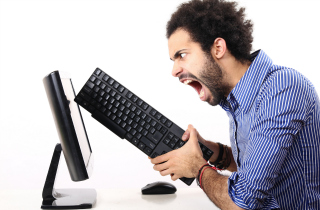 I realized this last week, while in an online argument with a particularly onerous political conservative. (I say “onerous” because he was a sort of Troglodyte, not because he was a conservative. I’ve had a number of meaningful online exchanges with reasoned conservatives. This guy was not one of those.) It occurred to me that I was no longer sure what was compelling me to continue the discussion. I wasn’t learning anything from my opponent. I had started to respond automatically, out of no real practical desire save to fight back. Besides being a waste of time, it was slowly upsetting my emotional balance. In such forums I strive to be a Kung Fu Master, but could feel myself slowly devolving into a Duelist or, even worse, a Tireless Rebutter.

The red flag, for me, was when I came dangerously close to misrepresenting myself in the conversation. After being snapped at that I couldn’t possibly know anything about the Iraq situation because I’d obviously never been in the military, I found myself typing, and confirming, the response:

Why do you assume I’ve never been in the service? Or is this just another instance of the conservative fantasy that there are no liberal-minded men and women in uniform?

I have not ever served in the military. And it was stupid of me to imply even in this most indirect manner that I had done so. I cut myself off and haven’t commented or even looked at that forum since then. Although I should say, it still shows up in my browser bookmarks, and it does take effort not to select it.

This entry was posted on December 5, 2006 by bilaldardai in Action Items, Mental Health, Neo-Futurists, Politics, Society, The Internet.