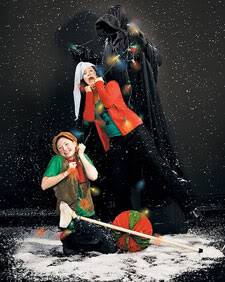 Like the earliest stages of a long-distance relationship, the days in between a weekend’s last performance and the following weekend’s first performance are blissful and maddening, filled with the anticipation of seeing your castmates again, standing on the set again, walking through the script and hitting the marks you were directed to hit, again. Opening night of A Very Neo-Futurist Christmas Carol was lovely, and the energy in the room was very positive. I had a great time. I look forward to having that time again this weekend.

The Neo-Futurists hit their twentieth anniversary at the beginning of December, and as such we’ve been given a hell of a congratulatory parade in the form of a lengthy TimeOut Chicago article, as well as a personal, laudatory TOC blog post from Theater Editor Chris Piatt, and a small album of new and old photography and audio, not to mention the cover of the new issue.

I find it a little humbling, to be a part of this paid attention. Despite whatever confidence I have in my abilities as a Neo-Futurist–confidence that always, I should mention, runs shrieking into the hollow of a nearby tree when Tuesday morning rolls around and I have nothing to propose at rehearsal that night–there’s always going to be that vivid part of my memory that exists as the audience member, that recalls the sound of my mind being blown that first time. I remain acutely aware that something I didn’t expect is happening right now and is happening all the time.

That can’t be me in these photos, I think. I don’t belong there. I’m like the temp in the office filling in for some actual Neo-Futurist who’s on vacation this week. I’m still on the outside of this place.

I’m still standing in line under the old, rotting white-wood sign with its cryptic acronym, in this part of Chicago I’ve never been to, where the surrounding blocks are like the alleys of basic superhero moments, alleys teeming with cauliflower-eared cutthroats and sneering, unshaven rapists. I’m still walking into this twisting space and I’m still not sure what’s going on. I’m still getting a nametag with nonsense written on it.

I am watching a play called Titanic! in which one performer walks onstage, slams a bag of ice on the floor, and proceeds to, along with the rest of the cast, scream in terror and run backwards across the stage, clawing madly at the air.

I am watching a volunteer from the audience have his head shaved completely bald to the strains of Wagner’s “Flight of the Valkyries.”

I am watching Andy Bayiates perform 27, a rhythmic half-sung expression of self that needles its way into my heart and never, ever leaves.

I am watching as the play One Night Stand begins in darkness and Barry White music, finally revealing a single bedside nightstand in a spotlight, and then simply disappearing.

I am shouting “Nine!” at the top of my lungs along with a hundred other people, trying desperately to see the play German 101 performed before the clock runs out, only to have the cast yelling “Nein!” back at us each time. I am getting the joke, all of a sudden.

I am watching an early draft of a song that ended up in Noelle Krimm’s City Girl!.

I am watching four attractive women sing the name “John Pierson” to John Pierson using the theme from Goldfinger.

I am watching Anita Loomis sing the tale of the Tiny Satan doll.

I am watching eight people stomp across the stage, set up small barricades, and begin flinging all manner of random props at each other while violent, dramatic music plays, as an attempt to describe what “must be going on in the apartment directly above mine.”

I am dancing, along with the entire audience, as an impromptu celebration of somebody’s recently deceased relative.

I am watching a gay adult male proclaim, matter-of-factly, that if the dozens of other gay men who were not allowed to dock their cruise ship in Singapore are still denied entrance, that “there’s room at my place.”

I am watching Genevra describe the safety and empowerment she feels as a woman in her theater while forcing the men in the cast to dance, shirtless, to Nelly’s Hot in Herre.

I am watching Sean describe how often he’s seen Steve recognized as a Neo-Futurist and remain ignored when he’s standing right next to him.

It is fortunate to be given the chance to do something you love. It is a miracle when that something loves you back. 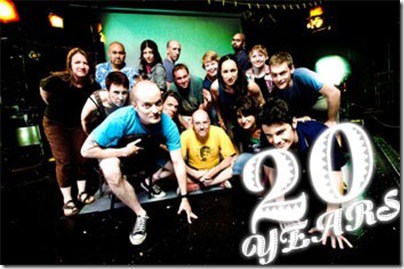 This entry was posted on November 27, 2008 by bilaldardai in History, Neo-Futurists, Performance, Plays, Theatre, Writing.