Have Yourself a Merry Little Christmas.

This short play was written as a present to my mother and father in-law, and performed by myself, my wife, her two brothers, and their wives as part of the regular holiday festivities. 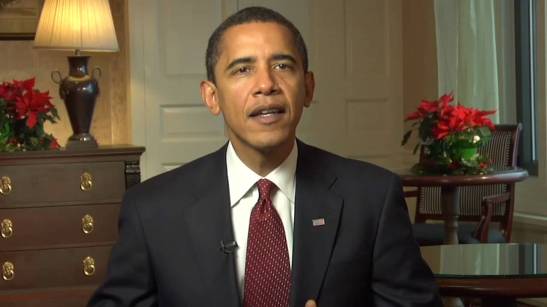 OBAMA: (onscreen) …and so I ask you to be strong, and to remain hopeful. We will, with faith in each other and good will for each other, make it through this crisis, and we will be a better, prouder America when at last we reach the daylight on the other side. Good night, God bless, and from all of us here at the offices of the President-Elect, have a Merry Christmas and a Happy New Year.

(The logo of the President-Elect appears on the screen. DARCY gives the monitor a satisfied smile. JEFF looks perplexed.)

DARCY: That was good. You helped write that? That was very good.

DARCY: Sure. I mean, let’s be honest, it’s no Election Night or Race in America speech, but for a holiday message? Good work, Jeff. And can I just say, again, thank you for getting me this job? It’s a dream come true to be working for the Obama team.

JEFF: Um. Don’t mention it. And thanks. Um. Say, Darcy, could you rewind that like ten seconds?

OBAMA: …and from all of us here at the offices of the President-Elect, have a Merry Christmas and a Happy New Year.

DARCY: Don’t understand what? You said you helped write that.

JEFF: I did. But…it’s just…he ad-libbed a little bit at the end there.

DARCY: What? The “Merry Christmas” bit?

DARCY: So what’s the problem with it now?

DARCY: Jeff, I get that this was a big moment for you, getting to write something for Barack, but you’re being truly weird. So he added a few words to make it sound more natural for himself. He’s a writer too, after all.

JEFF: Darcy, you’re not seeing what this is. This isn’t just a matter of editorial. I don’t care about normal editorial. The President-Elect has a better word than what I gave him, sure, go nuts, he knows best. But this…

JEFF: When you or I do that it’s just a request, you know, a statement of something you’d like to have happen. You follow?

JEFF: Do you have any idea what it means when he uses the second-person imperative? It means he’s issuing a call to action.

JEFF: Good god almighty. I mean, I know he’s ambitious, but what was he thinking?

JEFF: Find a way out of Iraq? Sure. Hit me again.

DARCY: Jeff, all he said was “Have a Merry Christmas.”

JEFF: (grabbing DARCY by the shoulders, panic-stricken) JUST HOW THE HELL DOES HE EXPECT US ALL TO DO THAT?

DARCY: You’re being insane. It’s a holiday message. The President-Elect is not forming an initiative to–

(MAXINE, another young Obama staffer, pokes her head into the room. She is holding a three-page document.)

DARCY: Hey Maxine. Do you have a second to tell Jeff he’s being a crazy moron?

MAXINE: Yeah, I think I can schedule that in. Jeff, you’re being a crazy moron.

JEFF: Max, did you see the new video address yet?

MAXINE: No. This is the happy-holidays jobby, right?

JEFF: Now it’s the have a happy holidays jobby.

MAXINE: (holding up the document in her hands) Well, that would explain this. Just came through the fax a few minutes ago. (She reads.) “Please at earliest convenience help Mr. Plouffe and Mr. Axelrod formulate a list of names for an exploratory committee on the matter of ensuring every American possible has a Merry Christmas and Happy New Year.”

DARCY: This is a joke, right? You’re both pranking me.

DARCY: No way did his office actually send that.

MAXINE: (hands the document to DARCY) See for yourself.

JEFF: I mean, Christ, it’s like mid-July all over again. You remember that?

DARCY: What happened in July?

JEFF: It’s not his fault. You should realize that. He doesn’t really know how to control it.

JEFF: It’s that hope and inspiration mojo thing he’s got going. He asks for something to get done and all of a sudden there’s thousands of dollars and enthusiastic personnel making it happen.

MAXINE: Mid-July we decide to have a miniature-golf outing, you know, just to blow off some steam, boost morale?

JEFF: And Barack’s out there with us, and about the fourth hole or so, he’s putting into the mouth of this metal ostrich–

MAXINE: –and he muffs the putt.

JEFF: And he knows it. So he starts yelling at the ball, “Move over! Come on, dammit, move over!”

MAXINE: Not only does it make it into the ostrich, it pops out the other side and rolls right into the cup. Now, I’m not a superstitious sort, but.

JEFF: Me neither, but here’s what we’re saying, Darce. He asked the laws of physics to do something for him and they did their best to accommodate.

MAXINE: So yes that was really sent from his office and yes he expects us to help put together an exploratory committee on ensuring every American a Merry Christmas. And yes the gears are already in motion as we speak.

(CAL, another staffer, pops his head in the door.)

CAL: Hey guys. You got the memo about–?

CAL: Yikes, huh? I mean, yikes. Must have just been caught up in the moment and forgot who he was, huh?

JEFF: True. I mean, this isn’t nearly as big a problem as when we let him order the pizza that one time. I forget, Cal, were you on the committee for that one?

CAL: I was supposed to be, got moved over to Foreign Policy Research instead. (Beat.) That was a strange transition.

CAL: Yeah. So anyway, Rahm is sending me out for a steak. Anybody here need anything?

CAL: Eat? Oh, no. Rahm just said he needed to spend a couple hours slamming his fists into a hunk of raw meat. That’s all. You know. It’s Tuesday. You know. You three good? Anything anything? I’m stopping by Starbuck’s.

(They shake their heads. CAL nods and exits.)

DARCY: So this is a real thing. There’s going to be an actual policy initiative here to ensure everybody has a Merry Christmas.

MAXINE: And a Happy New Year. Don’t forget that. You know how he hates half-finished work.

MAXINE: Maybe we can spin that off into a separate sub-committee?

DARCY: How does any of this sound logical?

MAXINE: (goes to a whiteboard on the back wall, opens a marker, and starts to write as they speak) The way I see it, we’re going to need small task forces on each of the major problem areas.

JEFF: Just what I was thinking. The Family Gathering Task Force–

MAXINE: –oh right, I hate those–

DARCY: –the Eating Too Much Task Force?

MAXINE: (writes it on the board) Nice work, rookie. What else you got?

DARCY: And one for Ugly Sweaters?

DARCY: Oh! And one for Spineless Commitment-phobic Man-Children Who Need To Move Out Of Their Parents’ Basement Already And Propose So I Can Finally Get My Grandma Jolene Off My Back About It?

MAXINE: What’s the acronym on that?

(ANDREW, a staff intern, walks in with a one-page document.)

ANDREW: Maxine? This just came through. It says it’s page four of something.

JEFF: (takes the paper) Thanks, Andrew. It is Andrew, right?

ANDREW: Only until next February. As soon as I turn eighteen I’m legally changing my name to Kralex Tree-Tall of the Middenwood.

ANDREW: Thanks. Holler if you need anything else.

JEFF: “From the Office of the President-Elect, re: Exploratory Committee on Ensuring Merry Christmas and Happy New Year.”

JEFF: “It has come to my attention…blah blah rhetorical flourish…”

MAXINE: People who would make good ambassadors, Darcy, not just people you want to send to the North Pole for a few years.

JEFF: Ah. “…it has come to my attention that…you didn’t realize that this was a joke. Lighten up. Happy Holidays, sincerely, President-Elect Barack Obama.”

DARCY: Actually, that was “lighten up; happy holidays.” And I know I’m new at this, but that sounds like a second-person imperative to me.

(ANDREW and CAL walk back into the room. CAL holds a large, raw T-bone steak in one hand. ANDREW holds what looks like a carved wooden longbow. Dozens of Team Obama staffers and Cabinet nominees enter the stage and look out at the audience. They wave, warmly, and smile big smiles.)

ALL: Happy Holidays, everybody!

(G.E. Smith and the Saturday Night Live band play a modified Christmas carol as the people onstage hug each other.)

(Lights fade. The voice of BARACK OBAMA intones over the fading sounds of celebration:)

OBAMA (VO): Seriously. Have a Merry Christmas and a Happy New Year. I mean it.

(The audience is strangely compelled to have a Merry Christmas and Happy New Year.)

This entry was posted on December 23, 2008 by bilaldardai in Performance, Plays, Politics, Society, Writing.