Yet another list from somebody whose opinion means no more than your own.

In case anybody was wondering, these were my ten favorite films released in the year 2008. 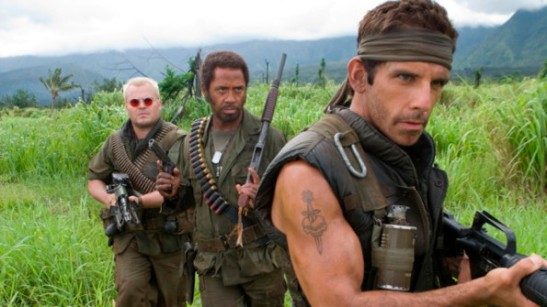 10. Tropic Thunder (dir. Ben Stiller)
Despite my previously stated distaste for Jack Black (who did, I’ll admit, also charm me a bit with his vocal work in Kung Fu Panda), I couldn’t help but love this film–it was such a vicious and freewheeling satire of the film industry and its myriad players and it hit so many of the comedic marks it aimed for, often obliterating the target entirely. There were moments my own laughter was ripped from me with gale force, and the only other film on this list that possibly made me laugh as often did so in no small part because it also starred Robert Downey, Jr. 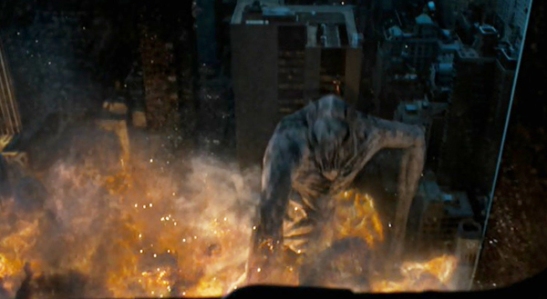 9. Cloverfield (dir. Matt Reeves)
The idea of telling a giant city-destroying monster story from the perspective of the civilians who are only trying to escape its rampage is a novel gimmick. The “found footage” film is no longer all that novel, but is nonetheless still a bit of a gimmick. So it is to the credit of the actors, director, and screenwriter Drew Goddard–whose lowly Minion I am–that Cloverfield manages to build tension, character, and pathos without becoming tiresome or stepping outside the bounds of its reality to reach a conclusion. At its heart, the story is about people and the decisions they make under dire circumstances…the way they choose to survive and, possibly, the way they choose to die. 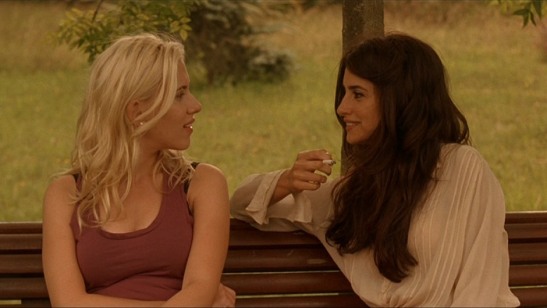 8. Vicky Cristina Barcelona (dir. Woody Allen)
I understand he’s been making films like this one since he began setting up shop primarily in Europe, starting with Match Point, but this is the first of Woody Allen’s films I’ve seen where I couldn’t identify any character as a surrogate for Allen himself. It is also, for my money, one of the most sensual and sumptuous films released this year, and features standout performances from Javier Bardem, Penelope Cruz, and the inherent beauty of Spain. I understand that this film was a comedy but I don’t recall doing much laughing. I don’t think it’s that sort of comedy. I think it’s just something you’re supposed to enjoy in languid sips, and perhaps in its quieter way that just releases the same endorphins. 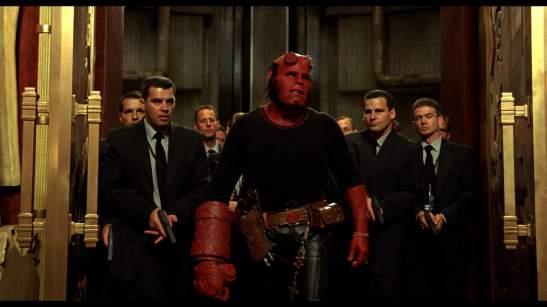 7. Hellboy II: The Golden Army (dir. Guillermo del Toro)
This was a fantastic year for the so-called “comic-book movie,” and while this exists lowest on my list among the three I’m going to be discussing, it is by no means a “lesser” film. As a filmgoer I value imagination, and Guillermo del Toro, working from the template provided by Hellboy creator Mike Mignola, has imagination in spades. Even the silliest moments in this film manage to hold some sort of dramatic weight, and the questions the film raises about the nature of monstrosity and self-actualization are as profound as anything you might find in a film featuring wholly human characters. 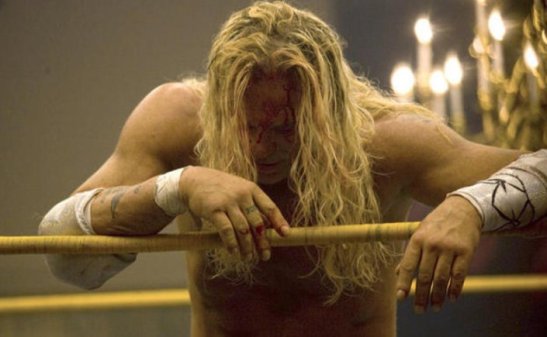 6. The Wrestler (dir. Darren Aronofsky)
A fictional documentary that is either about one man’s tragedy or about his triumph, anchored by an immersive and disquieting performance from Mickey Rourke as the titular character. Randy “The Ram” Robinson is an iconic and timeless character, a man forced out of the world where he was once a king into the harsh light of age and loneliness, trying his best to cope and carve out a new life and slowly realizing that there is simply no new life to be carved. The movie is full of so many wonderful little details that hit you two seconds after they’ve passed you by and then linger in your consciousness for the rest of the narrative. About the only misstep the film may make is in casting Marisa Tomei as the stripper who nobody seems to find desirable anymore. There is only so much disbelief I’m willing to suspend here. 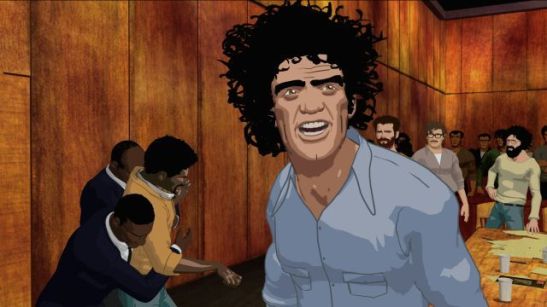 5. Chicago 10 (dir. Brett Morgen)
Although this pseudo-documentary, which combines both actual footage and dramatized, animated interpretations of court transcripts, officially premiered in 2007 at the Sundance Film Festival, the first major release was in February 2008. An examination of the various political and social forces that led to the 1968 riots in Chicago during the Democratic National Convention, this film grew increasingly relevant this year as another Chicagoan, Barack Obama, began his ascendancy to the presidency, and as it became clear that the youth vote had been mobilized in a way that hadn’t been seen in some time. Some of the abuses of power that occurred both during the days leading up to the convention and during the trial of the Chicago Seven (actually Eight, and more accurately Ten, as the defense counsel was also thrown into the jackpot at trial’s end) are positively stomach-turning–the binding and gagging of Bobby Seale, for one, is so horrific that it even moved perpetual pranksters Abbie Hoffman and Jerry Rubin to shocked silence. It is even more disturbing since you have no reason to believe that such things aren’t still happening somewhere else right now. 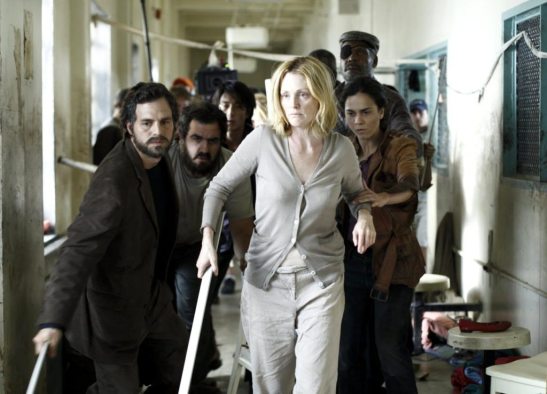 4. Blindness (dir. Fernando Meirelles)
Ironically, this is a film that I never need to watch again, because the trauma of watching it in the first place has left indelible scars on my psyche…which doesn’t sound like a recommendation, and for some people it shouldn’t be. It is not an uplifting film even despite its more hopeful ending, in part because the journey you take to get to that hope forces you to confront a primal fact about human nature. That fact being: no matter how civilized we all say we are, no matter how intricate and advanced our societies, it would take relatively little to collapse the whole thing on top of itself. In the world of the film, the only thing that happens is that people begin to go blind, and within six months, based solely on the massive loss of 20% of human faculty, civilization all but eats itself alive. I think it is important for us to see that. I think it is important for us to remember how close we live to the abyss, so we are always wary of how quickly we could fall in. 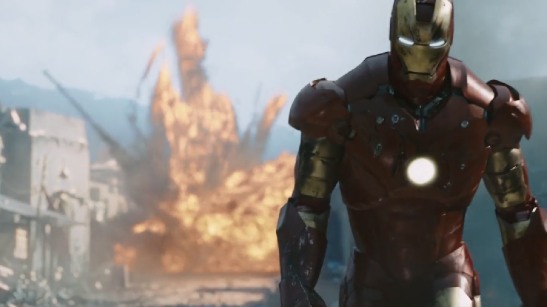 3. Iron Man (dir. Jon Favreau)
With the possible exception of Mickey Rourke, no other lead actor I saw this year took the reins of a film so completely and confidently as Robert Downey Jr. did as Tony Stark. Stark is dashing and debonair, so witty that you miss half of his lines because you were laughing at the one before, but also somebody whose eyes showed a man with deep, carefully obfuscated damages (a man who was, even before building the suit, hiding under armor). Stark is an interesting character in part because of the ways he doesn’t change as he develops his heroism. The interplay between the four core characters, particularly the hearkening back to classical Tracy-Hepburn interactions that occurs between Stark and Virginia “Pepper” Potts, is delightful. The action sequences are well-conceived and do a good job of building the illusions of weight and difficult violence. The film also features the funniest performance by a fire extinguisher I’ve ever seen. Definitely one of the most purely enjoyable shots of adrenaline I’ve experienced in a movie theater–an excellent blend of rambunctious adventure and operatic melodrama without engaging in any sort of genre clumsiness.

2. The Dark Knight (dir. Christopher Nolan)
Most of what I want to say about this film I already said back in July, so I’ll just note that after seeing the film again on DVD I found even more to appreciate in the design of the film, in the way that Nolan builds a believable reality and then blends in the fantastic elements of Batman and his nemesis. Everybody involved takes the story seriously, and as a result everybody’s role becomes infused with its own certain power. I want to especially mention, after a second viewing, just how amazing Gary Oldman is as Jim Gordon–Heath Ledger will rightly get the supporting actor nominations and praise, but Oldman is also working at an incredible level, portraying a decent man in a terrible situation, and one whose vulnerabilities, unlike those of his shadowy partner, are constantly in the open. 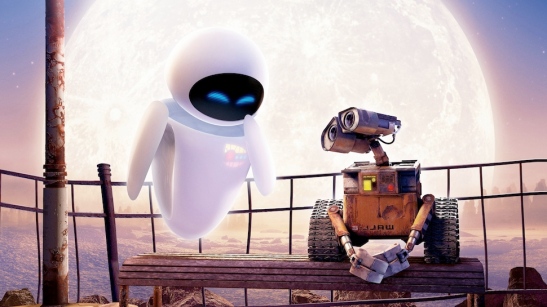 1. WALL·E (dir. Andrew Stanton)
It’s kind of hard for me to articulate just how deeply this film affected me. I connected on a very basic level with the mostly non-verbal protagonist, a creature who has been dependably doing its job for an undetermined eternity, grasping for any connection to something that isn’t work…searching for something that is purpose, not just task. The sort of gentle desperation WALL-E exhibits when he first meets EVE is charming and sadly funny, but what it really does is set you up for the waves of heartbreaking joy you feel when EVE first starts to reflect some of that attention back. It’s not just a story about a first love, it’s a story about first love between two characters that had no idea what love was in the first place. The so-called political and environmental “messages” of the film fall into the distance when you focus on WALL-E and EVE…which is how it should be.

This entry was posted on January 6, 2009 by bilaldardai in Critique, Movies.