I realize I’ve been conducting an informal and completely undocumented study of sudden audience departure.

As it is, I’ve been in a position for the past five years, working as a Neo-Futurist, to observe a number of interesting and different walk-outs–and our company aesthetic being what it is, it’s something we gradually grow to embrace as just another random element of the performance. Our five-hour production of Eugene ONeill’s Strange Interlude last March at the Goodman inspired a walk-out so dramatic and vocal that more than one person thought it had been staged.

While I don’t have the hard data to back this up, I might be willing to estimate that Too Much Light sees at least one audience member walk out every six weeks or so. This can be for any number of reasons.

Our show happens late at night and is consistently, if not with complete accuracy, referred by word-of-mouth as a comedy show. As a result, we see our share of drunken audience members arrive expecting an improv/sketch revue and then get up in disgust when they encounter instead a performance-art spectacle with occasional funny bits.[1]

Much of our work is overtly political. We’ve had audience walkouts occur because of our unanimous support of gay rights, for example, or our more incendiary responses to the Bush administration. We accept that this might happen when we agree to put the piece into the show. One of my proudest personal moments onstage as a writer/performer occurred last winter in Washington, D.C., when I performed a monologue titled Lather, Rinse, Regret, about the case of Maher Arar, the practice of extraordinary rendition, and who we had become as a nation. I performed the monologue while solemnly washing an American flag in a tub of water. A woman in the back of the house stood up and walked to the door. I heard it close heavily behind her. I’ll never know if it was the image or the text that offended her; she never contacted me to let me know. 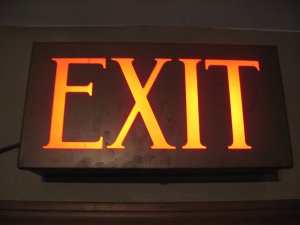 I feel that we are typically trained in the theatre to take a walkout as an act of aggression and often to internalize that as a judgment of performance. “The audience would not have walked out if your show was any good.” I’m sure that in such cases this is the personal assessment of those performing the exit, (and I say “perform” because a walkout is in its own way an art form, as varied and fascinating as any other art form).

A walkout is an act of surrender. It is to admit that one has no capacity to deal with their own emotional response and can therefore not deal with the stimulus of that response.

Here’s what I can tell you for absolute certain about the numerous walkouts I’ve witnessed at Too Much Light. After they happen, the audience that remains is almost universally on our side. Even people who haven’t necessarily been enjoying the show will not stand up in sympathy and follow, will not call back to the stage that the walkout was right. Because nobody, in the end, sympathizes with a coward.

Some of those who stay despite their problems with the show send us angry letters, or bitch about our show on Yelp or wherever. I respond to the direct letters all the time and am happy to do so.

I want to talk to you and I want to listen.

I cannot do that when you leave the room.

[1] Or, they get up because they’re about to vomit.  In our box of blank nametags that we keep in the lumber storage room. An incident which will then be immortalized as a drinking song written by one of our ensemble members and performed the following weekend during the show.

This entry was posted on August 24, 2009 by bilaldardai in Theatre.