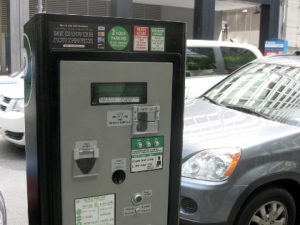 Among the many, many complaints about the city of Chicago’s move to newfangled parking pay boxes instead of meters was the realization that we were about to leave behind the little victory of finding a parking space with time remaining. Sure, this realization was relatively minor compared to the larger issues of the fee hike, the thus-far poor meter management, and the mind-boggling details of the city’s sale of the parking rights in the first place, but sometimes it’s the minor things that sting the most, like paper-cuts in the webs of your fingers.

And yet…today I parked on Roscoe before going to a job interview, and as I walked to the pay box, a man across the street called over and asked me if I could use the last ten minutes on his parking slip.

Since I needed more time than ten minutes, this wasn’t particularly useful to me, but I appreciated the gesture. When I left the area I had about fifty minutes left on my own parking slip, and, inspired by my own samaritan’s act of generosity, I gave it to the person who had just parked two cars behind me.

Now, I’m not optimistic enough to think that the private corporation that installed the pay boxes intended for such moments of social commiseration to occur, and indeed I’m sure that some bean-counter somewhere is estimating the possible losses in revenue that occur every time one of us walking dollar-signs decides to behave in such a manner, reporting the figures to their CFOs, who will then raise the prices again in “response,” while moaning that the profit margin Simply Isn’t High Enough This Year.

Intentional or not, though, I’m looking forward to more of these moments. Receiving somebody’s leftover parking minutes and handing over my own were a hundred times more satisfying than any tiny endorphin rush I used to receive from finding a meter with a half hour still bought and paid for.

I’m a performer in part because I like the versatility of expression to be found in people’s faces. Anything that allows me to have an additional positive moment with a stranger, to see a look of personal satisfaction or gratitude is something that I’m glad to have exist in the world.

Even if it’s a newfangled parking pay box.

This entry was posted on September 4, 2009 by bilaldardai in Chicago, Politics, Society.