Time exists in a vacuum. It moves at its own consistent pace, unaffected by external pressures to change that pace, unburdened with personal whims to quicken or slow.  It happens whether or not you’re here, whether or not civilization occurs, whether or not two proteins decide to become life. There’s nobody around to determine its units of measurement, but it’s still time.

History, on the other hand, has wake. History sinks to the ocean floor and carries things with it as it goes, in amounts directly proportional to the weight of that moment. 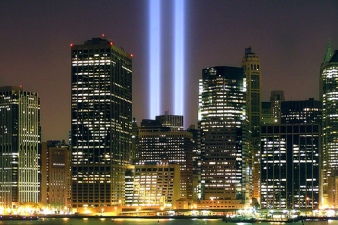 Today is the eighth anniversary of Americans lowering their eyes and telling each other to Never Forget. I’m not being glib about that. We have a right at least, a duty at most, to reflect on the events of this date in 2001. We remember the 3,000-plus innocent civilians butchered in buildings and passenger planes. We remember the first responders who died trying to save the lives of others. We remember the cries of anguish and horror, we remember the fire, the clouds of vicious dust and smoke, we remember the rumble of engineering wonder collapsing upon itself.

We will never forget that.

We should never forget the days of unity and peaceful coexistence, the spontaneous anthem-singing, the need to call one’s friends and family to assure their safety, to be thankful if you lost nobody. We should never forget the way the attacks drove some people into racist insanity against not just Muslims but all Other peoples; sneering, shifty-eyed, fantasizing about putting them all on a boat out of our country for good.

We should never forget the art that arose in response to the attacks, much of it beautiful and haunting works of music, poetry, prose, paint, theatre, each their own glowing facet of the human experience. We should never forget that some of the art was designed to whip us up into a fever pitch of nationalism, glorifying wanton bombing and unrealistic depictions of instantly useful torture.

We should never forget that some of these men and women never came back at all.

We should never forget that the mastermind of the attacks was a man that we ourselves trained in the art of mayhem and subterfuge. We should never forget that the hard-line conservative regime of Afghanistan in which that mastermind found an ally was a regime that we acknowledged as the “rightful” government of Afghanistan, a regime that we praised and awarded for keeping down the opium production while turning a blind eye to their human rights abuses.

This entry was posted on September 11, 2009 by bilaldardai in Essay, Eulogy, History, Politics.