Your middle name was the easier. Khalil is Arabic for friend, a concept that your mother and I value greatly; a wealth that we arguably have the largest quantity of in our lives at this point; and a word you’d speak in Elvish if you wanted to enter the Mines of Moria. It is the name of one of my favorite poets, Khalil Gibran, whose The Prophet is one of the few works of literature I’d ever describe with the superlative essential, a masterpiece that you could open at random and always discover a multifaceted gemstone of wisdom, written gorgeously, to ponder until your heart burst. Gibran’s first name is often spelled as either Khalil or Kahlil, but we chose the former due to its closer cosmetic proximity to my father’s name Khalid.

Your first name took a deeper time and consideration, and ultimately a leap of faith; and this is why anytime we were asked if we had a name picked out for you we would say we did not, and when they asked if we had a short list the affirmative response would be tinged with noncommittal. Before we discovered your gender, we’d managed to put together a lengthy list of delightful women’s names but had only nebulous, blurry visions of what we would call a son. The few names that managed to surface from that haze were not just researched, they were damn near dramaturged.

Then we held you for a moment, after the hospital staff had briefly cleared the room. We looked at your face and your expression and assessed the sounds you were making, we asked you directly just in case you’d respond. In the end you were, undoubtedly, Robin. There is so much to the name, Robin, so much that speaks to who your parents are and to the sort of boy and man we look forward to discovering, and it’s not so much that you were named after any of these as it is that you now belong to the collective idea of Robin.

There is the bird, of course, the robin. It is a songbird, and your parents have a long and fulfilling relationship with both birds and music, so much so that your father has a raven’s feather indelibly inked on his arm and your mother has a 6-8 conducting pattern inked on hers. Native American mythology tells us that the robin is both a cultural entertainer and a beast of great selflessness, whose distinctive red breast was earned after a night of beating awake a dying fire to help a father and son survive a cold, cold night.

There is Robin of Locksley, better known as Robin Hood, that most legendary of populist anti-heroes, a combination of class warrior and swashbuckler who may one day dazzle you with his exploits as he has done for millions of young boys in nearly every incarnation, including the animated fox, the dashing Errol Flynn, the woefully miscast Kevin Costner.

There is Shakespeare’s infamous hobgoblin, Robin Goodfellow, also called The Puck, also called “that merry wanderer of the night,” from A Midsummer Night’s Dream. And perhaps this acknowledges both your roots in theatre and literature as well as the affinity we have for clever, cunning tricksters and creatures of magic. 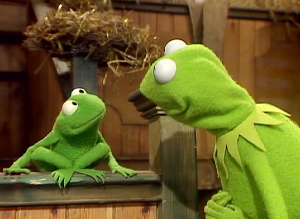 There is good-hearted, noble little Robin the Frog, nephew of Kermit, one of our hero Jim Henson’s most earnest creations. Eternally small, but blessed with vision, hope, and a lack of prejudice (it’s noteworthy that his best friend seemed to be the gentle ogre Sweetums); Robin is something of a zen presence amidst the anarchic weirdness that is the entire Muppet domain, most special for being relatively average and for his ability to inhabit the chaos of his uncle’s world in complete stride while occasionally taking a quiet focus of his own. You’ll get to know him very well. We own the complete run of The Muppet Show on DVD. DVDs are those things that people used to watch back before the studios figured out how to pump the media directly into your cerebral cortex.

There are others, of course, whose reference I’m either forgetting or neglecting–comedian and actor Robin Williams, for example, for whom I’ve long had a fondness and respect; and the masked adventurer Robin, sidekick and balancing force for the Batman. I’m not mentioning all of these Robins to imply that you are expected to be like any of them. You will be your own Robin. You will be a different and wonderful Robin. You will be a Robin that joins this earthly and unearthly pantheon of Robins and imbues it with your own intrinsic Robin-ness.

And someday perhaps you will be thought of, when somebody else chooses to name their own son Robin.

But henceforth, every other Robin I meet is going to remind me of you, instead.

This entry was posted on January 26, 2012 by bilaldardai in Essay, Fatherhood.