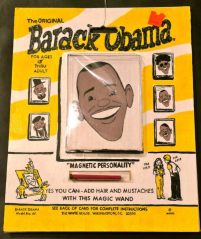 “Magnetic Personality” by Jen Ellison and David Stinton, from The Neo-Futurists Hall of Presidents

As I’ve mentioned here previously, this fall I’m a participant in The Neo-Futurists’ production of 44 Plays for 44 Presidents, part of the much larger Plays for Presidents Festival, which involves over 40 other theaters nationwide putting on their own productions of this play.

One part of each theater’s project was to “adopt a president.” Each theater is responsible for filming a version of their adopted president’s play and sending that to the festival’s curators, who will edit all 44 separate videos into one giant version, to be made available for viewing online.

Theaters are also encouraged to create other work, either related or unrelated to their adopted president. For our part, as the theater in charge of Obama, we’re converting our large lobby space — affectionately referred to as the State Park — into a politically themed high school basketball court. You can see the amazing designs below, from longtime Neo-Futurists set designer Dan Broberg (floor logo by Phineas X. Jones). 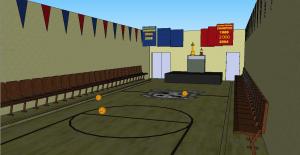 Part of the overall idea is to create an audience-interactive experience that simulates Obama’s tenure so far…by creating a set of basketballs that are painted to represent several of the policy fights and other tribulations he’s had to deal with since taking office, such as:

The ball representing “bipartisanship,” naturally, will be deflated.

As an audience member, you are then invited to shoot these basketballs at the hoop and see how your alternate Obama presidency fared.

In order to make this happen, we need about a dozen basketballs. If you happen to have a basketball you’re no longer using and wish to donate it to this project please contact me as soon as possible to arrange a drop-off or pickup, via my social media or by emailing bilald [at] neofuturists [dot] org. If you don’t have a basketball to donate, please feel free to pass this call out to somebody who might. We’ll be deeply grateful, and will include your name somewhere on the walls of the gymnasium.

This entry was posted on September 12, 2012 by bilaldardai in Action Items, Neo-Futurists, Theatre.