(Thoughts on the second season of BREAKING BAD, written by somebody who doesn’t have cable and by the time he had Netflix he didn’t have time which is why he’s years behind the rest of you.) 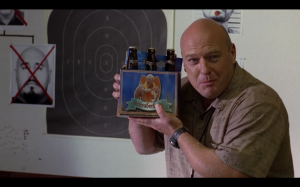 As the closest thing the narrative has to a traditional “antagonist” — albeit one on the side of law and order — Hank’s a bit of a study in contradictions. He’s somebody we might root for if he weren’t standing in the way of Walter’s mission to provide for his family, even though that mission has grown increasingly ignoble and blood-soaked. He’s something of a blue-collar meathead, often racist and boorish, but he’s both a better lawman than he appears at first glance and in many ways a better father figure to Walter Jr. than Walter himself. His outer confidence is revealed during this season for the coping mechanism it is, a glass globe straining against the pressures of panic and assumed inadequacy, both as professional and as domestic partner. The bursting bottles of Schraderbrau in his garage are about as dangerously on-the-nose symbolism as this series has gotten, and it’s only because of how well it’s situated amidst other tensions that it doesn’t come off as cloying.

It’s easy to think of Hank as a buffoon for Walter to run circles around, but that doesn’t give Hank enough credit for the work you often see him doing, and for the obvious respect his team has for him. Gomez lobs insult after insult his way because they are brothers, not because he doubts Hank’s acumen. It’s reasonable to assume that Hank would already have caught Heisenberg by now if Heisenberg were anything like the usual crop of drug-dealing kingpins he’s already dealt with. He’s stymied by Heisenberg only because Heisenberg isn’t following the usual, predictable patterns of such criminals…and the only reason that’s happening is that Walter was clueless about what those patterns should be before he started cooking and selling meth.

Like Walter, Hank’s strength is in the way people have underestimated him and continue to underestimate him. While it’s true that he was woefully underprepared for the realities of El Paso and Juarez, he was better prepared than the rest of that unit for how to deal with things going horribly wrong. The El Paso unit had grown so complacent about the horrors of the cartel that they willingly walked into a deathly trap; Hank, for all his casual bravado and gallows humor, is never the sort to be complacent about the stakes in play, because he always remembers that the stakes include his own life.

As with Skyler, this instinct of Hank’s also plays into his marriage with Marie, another unpredictable force that he’s simply trying to survive. It’s notable that he’s most relaxed, most himself, in the presence of his DEA team than he ever is around his wife and the White family … although it remains important to him to try to be more engaged with them. Hank and Walter both are offended by the prospect of failure, but whereas Walter’s response to failure is to react with rage and disappointment, Hank tends to try and defuse the situation and make the best of what remains.

It’s unsure if that mode can last, however. Several bets are now off as far as the escalation of the pursuit goes, and with players such as Saul and Gustavo now in the mix — unbeknownst to the DEA team — the Heisenberg case will gradually become something much larger than the knuckleheaded meth operations Hank is used to, and his capacity to joke about it seems less likely to remain intact. Considering that this sense of humor is part of what keeps him balanced in the midst of both professional and personal chaos, the loss of it could so damaging to his identity that he starts taking more risks than he otherwise would … and he wouldn’t really be Hank anymore, he’d be the momentum of Hank, driving forward to end this Heisenberg mess once and for all. And momentum is good at accomplishing many things, but self-preservation is not among them.

This entry was posted on January 20, 2014 by bilaldardai in Breaking Bad, Critique, Television.