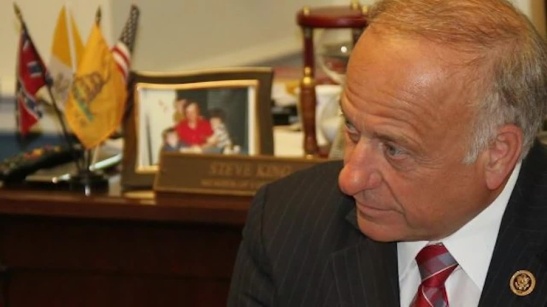 After the police shootings in Dallas, Steve King (R-IA) promptly and loudly blamed President Obama and an “anti-white / anti-cop” mentality for the attack. This is, of course, also the same Steve King (R-IA) who referred to non-whites as “subgroups” and questioned whether any of them had ever contributed as much to civilization as white people.

I find myself wondering what King will have to say about a similarly repulsive ambush on police officers, carried out in his own state, by a white man who was once ejected from a high school football game for waving a Confederate flag–a flag that Steve King displays on his own desk in the same cluster as the American flag that he has said Colin Kaepernick and other athletes have been “dishonoring.”

Politically speaking, he’s probably best off not issuing a statement of any kind. But his silence should ring as loudly as any of his previous speech.

This entry was posted on November 2, 2016 by bilaldardai in History, Politics, Society.