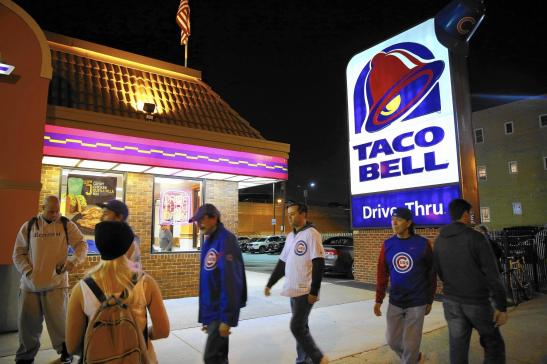 I’m imagining all of the goth and counterculture kids who had to suffer the loss of The Alley and the Punkin’ Donuts observing the Wrigley-villagers lament the end of their Taco Bell and it’s like finding the screenplay to an unfinished John Hughes movie.

TAD: I know. We haven’t always treated you well.

TAD: We weren’t there for you when The Alley went down. We were wrong. Isn’t that right, guys?

TAD: But if we don’t band together to save this Taco Bell now, where’s it going to stop? Tomorrow it’s a coffee shop. The day after that it’s an orphanage. What do you say, Spikes? Truce?

TALON: Whatever. Forget these squares. Serves them right, Spikes. Let them deal.

SPIKES: Shut up, Talon. Fine. We’ll help you. For the orphans.

TAD: For the orphans.

THE ENTIRE SOUTH SIDE: Hey, let us know if you’re interested in putting this kind of time and effort towards a real problem or two, okay?

This entry was posted on August 3, 2017 by bilaldardai in Chicago, Fiction, Movies, Plays.