Read Part I and Part II.

Time served is not a factor. All justices begin their 10-year term from the moment the term limits are enacted.

In this scenario, Justice Ginsberg retires in March 2023 and Justice Breyer in August 2028 after their 90th birthdays. All other Justices are young enough that they finish out their ten-year terms.

If a Democratic president takes office in 2021 and nominates a liberal justice to replace Ginsberg, the balance of the Court still remains 5-4 conservative. If that Democratic incumbent remains in the presidency for a second term and nominates a liberal justice to replace Breyer, the Court still continues to retain its 5-4 conservative bent. If a Republican president assumes office for the 2021 or 2025 terms, or both, the Court would lean to 6-3 or 7-2 conservative by the end of that Republican’s tenure.

But in the 2029 term, with seven Justices retiring at once, either the Republican or Democratic president who takes office that year gains the opportunity to create a court of overwhelming majority in either political leaning: 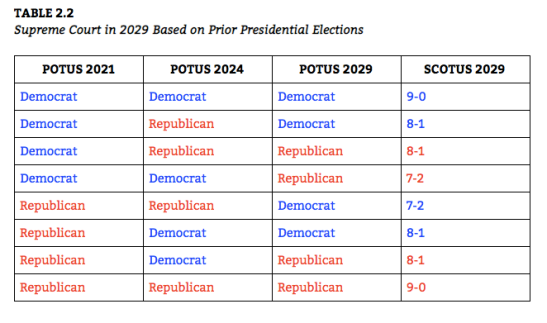 In other words: The 2028 election becomes a referendum on the power of the president to shape the Court. The 2020 and 2024 elections place a burden on the Democrats to win the White House solely to play defense on their judicial minority, but the reality is that these elections only matter in terms of whether or not the liberal or conservative majority that arises in 2029 is 7-2, 8-1, or 9-0. Practically speaking, these are distinctions without differences. The likelihood of two Justices convincing three others from the opposite side of the political spectrum to join them on a majority opinion is not high to begin with; the possibility of four or five Justices switching their natural political inclinations nothing short of miraculous and quite possibly suspicious.

Similarly to Scenario 1, the essential pendulum of the Court is to swing back and forth from these extreme paradigms. In both such cases, what you end up with is a SCOTUS that spends ten years at a time enacting one political ideology’s will, which in many ways feels like there’s no need to appoint multiple judges at all. Instead of a Supreme Court, all we might need is a Supreme Justice.

This entry was posted on October 4, 2018 by bilaldardai in Essay, History, Politics, Science.