“How do you know there’s an afterward?” 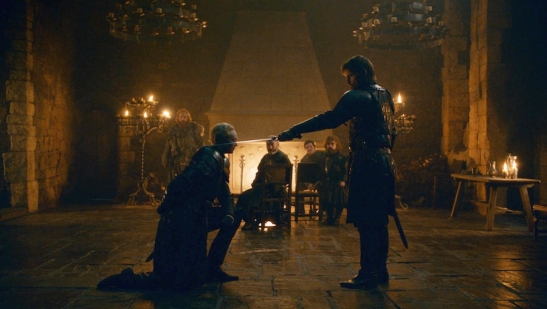 Assorted Thoughts on GAME OF THRONES s8e2, “A Knight of the Seven Kingdoms.”

– Similar to the prior episode, “A Knight of the Seven Kingdoms” spends most of its hour bringing together individual characters and letting the weight of their shared or unknown histories catch up with them, but in addition to this dramatic device we add the stakes of impending doom. The arrival of the White Walkers forces nearly every character to stop being coy for once, and to demand outright the things they want or need, be it camaraderie, validation, redemption, or the consummation of a long-simmering desire. Nearly everybody is living in the present of what may be their last breaths, and the results are funny, sad, sweet, and sober.

The exception here is Danaerys, who despite her declaration of putting aside her conquest continues to split her focus between the Night’s King and her ambition to claim the Iron Throne. Everybody else is entertaining the notion that they will die and rise again as thralls, whether they’re ready to believe it or not. Danaerys is instead striding around the castle deciding whether she needs to replace Tyrion as her Hand, a political court appointment for a court that she does not have fully in her power yet. When Jon finally confesses the truth to her about his parentage the most immediate thought she voices has nothing to do with their incestuous relationship nor with discovering she has family she never knew, but that he now has a claim on the prize she has coveted for years.

While Bran asks Jaime how he knows there’s “an afterward,” it might be a question Dany needs more urgently to hear.

– To that end, this is speculation, not spoiler: I have a growing sense that Sansa Stark is one of the many characters who does not survive the assault on Winterfell. In the short time that Danaerys has known Sansa, she has been given the opportunity to bear witness to Sansa’s strength and grace — in the way she thinks first of her people’s welfare, the way she values the character of a person like Brienne, and the humanity she displays upon embracing Theon Greyjoy. But Danaerys has not yet internalized everything she’s witnessed, because she remains, right now, blinded by her own sense of entitlement. Like Cersei, her focus on the throne is currently detached from the question of what it means to be a ruler, particularly in a world as brutal as this one. She is queen because she’s supposed to be, not because she fully understands the responsibility it entails, and such a blind spot has laid low many monarchs before her including those within her ancestry.

I don’t think she will realize what it means to be responsible for a realm until — again, my speculation — she watches Sansa give everything she possibly has to give to ensure that some of Winterfell’s people may yet survive. I think it will finally, tragically, open her eyes to the power of sacrifice in a way she has not yet experienced.

– Tyrion’s toast to the perils of self-improvement is only half a jest, really. I think he’s smart enough to know that while he and Jaime might prefer the simpler pleasures of their younger days they both know they are better men for the tribulations they’ve faced and the people they’ve chosen to be affected by. Jaime, in particular, has spent so much of his adult life attempting to recapture the sense of heroism he felt in his youth when he was a squire for Ser Barristan Selmy. He knows that some of his sins are unforgivable but he still wants to believe that he can do enough good to be worthy of the oaths he’d sworn, whether that was his own knighting or the day he joined the Kingsguard. Part of that good is in bestowing knighthood upon Brienne, who is the one of the people he’s met who most deserves such an honor — the sort who makes the concept of knighthood better, instead of just being considered a better person due to the knighthood.

– I don’t even care how Ghost got back to Jon’s side, I’m just glad to see the big lug here for the battle to come. I hope he survives. I’m still not quite over what happened to poor Summer when he tried to defend Bran against the wights.

– There’s a great deal to be spoken of in terms of the swords in this episode, with their presence and use carrying a great deal of meaning. To start with, we have the twin Valyrian swords Oathkeeper and Widow’s Wail, held by Brienne and Jaime respectively, forged from what was once the House Stark greatsword Ice. To have it return to the Great Hall of Winterfell is no small thing, even in these shapes and with these owners. For Jaime then to use one of these swords to knight the bearer of the other while within Winterfell also carries a certain type of ghostly poetry.

We also watch another greatsword, House Tarly’s Heartsbane, handed off to Jorah Mormont shortly after a curt, but strangely amicable conversation with his young cousin Lyanna, lady of the house he once disgraced. Samwell’s decision to give the sword to Jorah would have required significant internal reconciliation on his part. Jorah is, after all, utterly loyal to the woman who had Sam’s father and beloved brother killed; he is also the son of Lord Commander Jeor Mormont, who was more a father to Sam than Randyll Tarly ever bothered to be. To provide Jorah with Heartsbane is to decide for himself that his debt to Jeor is worth more than his distrust of Danaerys. It also puts in Jorah’s hands a family sword in place of Longclaw, which is now held by Jon and which Jorah understood could never belong to him again.

At the same time, we see that Sam has not moved past his grief and anger, as he coaxes Jon to stake his claim and displace the queen to whom he has already bent his knee. This four-person web — Jorah, Dany, Jon, and Sam — has an equilibrium while the four are under existential threat, but this is not currently sustainable. At some point Sam will push again, and Jon will be forced to choose between his family and his friend, and the choice itself will change these relationships forever regardless of how he decides.

– Podrick’s song is a classic one from Martin’s text, known only as “Jenny’s Song,” but from that text we have a lot, like seriously A LOT of history to unpack about this song being sung during the show’s last season, and this episode in particular. The most notable narrative antecedent for introducing an original song in this show was “The Rains of Castamere,” a song celebrating House Lannister’s utter destruction of a rival family that then heralds the Lannister massacre of Robb Stark’s forces at the Red Wedding.

In the case of “Jenny’s Song,” the titular character is a peasant woman called Jenny of Oldstones, who caught the eye of Prince Duncan Targaryen, the heir of King Aegon V Targaryen. Prince Duncan’s love for Jenny compelled him to break off his engagement to the daughter of Lyonel Baratheon and instead marry Jenny. When his father demanded Duncan choose between the throne and his bride, Duncan chose to abdicate the throne. The fallout of this decision included several major events, including Lyonel forswearing his loyalty to the crown and declaring himself the first in a new line of Storm Kings, a short-lived and less consequential Baratheon rebellion than the one that would eventually see Targaryen rule usurped entirely. The marriage and eventual acceptance of Jenny at court would also bring into the Targaryen household a prophetic crone, a friend of Jenny’s, who expressed that “the prince who was promised” — the rebirth of legendary hero Azor Ahai — would come from the Targaryen line.

Duncan and Jenny would live happily together but not long; Aegon V’s reign ended with the Tragedy at Summerhall, an attempt to hatch seven new dragon eggs with magic that instead caused a fire claiming the lives of the king, Prince Duncan, Kingsguard Commander Ser Duncan the Tall, Jenny, and several others. The crone herself either died at Summerhall or escaped into seclusion in the riverlands, becoming known as the ghost of High Heart. When Aegon’s successor Jahaerys II sought her out, the counsel she gave him compelled him to see his son and daughter Aerys and Rhaelle wed, believing that the prophecies surrounding Azor Ahai required this match.

Aerys and Rhaelle were the parents of Rhaegar, Viserys, and Danaerys. Rhaegar, in particular, was preoccupied with the idea that a child from his line would be a hero of destiny, and then he ran off with Lyanna Stark, who gave birth to Jon Snow while Rhaegar was being killed by Robert Baratheon on the Trident.

So: We have a song about a woman whose love made a prince give up his throne, whose friend predicted the return of Azor Ahai in the Targaryen line, being sung on the eve of a battle against the Night’s King, while Jon tells Dany that he is the son of her brother, who believed his son would be that same prophesied prince. There’s a lot being set up here and I’m still not sure that all of it is designed to pay off as it seems to be stated. Prophecy tends to be tricky, after all — interpretations and mistranslations abound in this world, and even Melisandre has been proven wrong in her beliefs.

– There’s something very enigmatic about Bran’s decision to secure himself in the godswood, and force the Night’s King to come to him there. A godswood, after all, is where the Children of the Forest created the first White Walkers, and this decision seems to reflect that Bran knows something about the power and history of such a place, enough so that he feels it is his best battlefield should his foe make it to him.

This entry was posted on April 21, 2019 by bilaldardai in Critique, Essay, Game of Thrones, Television.