Write Club is a monthly, literary bloodsport in which contenders face off against each other with 7-minute essays on competing topics. Below was my combatant essay based on the prompt “MARTIANS,” facing off against “SANTA.” This essay was performed on December 17, 2019, at The Hideout in Chicago, and was defeated in its bout.

People of Earth! I submit to you that we are complicated beings, but first and foremost we are creatures of imagination. I submit that our imagination, as collective and as individual, is our most powerful evolution, superior even to our opposable thumbs and our soul-crushing anxiety. From that imagination, after all, has come the stories we tell each other, which have served since the first desperate sparks of civilization to make sense of a chaotic existence. If our stories have not provided answers they have provided challenges; if not challenges then comfort; and if not comfort then determination. The stories that inspire shape our sciences. The stories that endure shape our societies.

Let me tell you a story now. Let me spin for you a speculation of the rough-drafted, still-vaguely-simian versions of ourselves, alive during that tentative era when our only defense against the darkness was whatever we could harness of the painful, hungry beast that danced on the edges of wood fragments. An era when we were only pretty sure that the sun would come back? Because it did the day before? So maybe?

Imagine the moment that we are finally able to view the night sky with more than terror and awe, when the distant lights begin to feel less like the glint in a predator’s eye and more like the gleam in that of a lover’s. Imagine having put aside fear long enough to notice how two of those specks of brilliant dust seem to behave differently than the rest, seem to hold a single hue and to travel in trackable patterns like the shapeshifting moon, itself connected to our tides and certain other cycles. Imagine the leap of intuition it takes to guess that these might be anything like the ground on which we already stood. 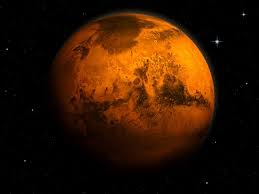 Now: While astronomy may focus on the bodies of the vacuum, the discipline itself does not develop within one. Concurrently, our ancestors are building narratives of beings that spoke for each aspect of their environment: the spirits of rock and river; the gods of music and wine. They tell each other the tale of how the goddess of love and beauty emerged luminous from the foam of the seas; how the god-king of lightning decreed she be married to his ingenious, abused son the god of fire; and how the god of war and goddess of love seduced each other despite such divine edicts. And the storytellers, as they’d done with the patterns they saw in stars, immortalize the torrid triangle upon the void’s dark canvas. Deadly, breathtaking Venus on one side; cruel, forbidding Mars on the other; and between the two of them our own molten forge, erupting with rage now and again through the volcanoes.

There have been other names and identities for these planets, mind you. The Egyptians called the red one Her Deshur, star of mighty Horus. The Maya, on the other hand, considered Mars little more than a gear on a cosmic timepiece, insisting rather that Venus was the dominion of warlike Quetzalcoatl. But Rome, in all its excess and high melodrama, continued to loom high in the consciousness. We in this room can recognize this easily, we whose nation’s capital reflects the architecture of the empire’s glory and whose politics now reflect the architecture of its decline. We allowed that the men of the pantheon would be the major arcana and that the women would be the moons and the asteroids, and as such we declared the solar system to be the last lingering conquest of both Imperium Romanum and garden-variety patriarchy.

It is 1877, and Giovanni Schiaparelli has completed by telescope an intensive study of the surface of Mars. He has identified what he refers to as continents and maps an intricate network of what he calls canali, or channels. But the original Italian will be mistranslated as canals, leading to a misunderstanding that Mars holds water, leading to a misconception that Mars holds life. The authors of Europe all but line up to attempt their own plays for this new stage, and the wonders they devise begin with utopian societies of peace-loving beings, welcoming visitors with open arms, sharing freely of their technology and philosophy.

But fiction is also not written in a vacuum, and within 20 years Kurd Lasswitz has published Auf zwei Planeten, which tells of Martians arriving at the North Pole and mediating the nascent arms race between England and Germany by unilaterally destroying Her Majesty Queen Victoria’s Navy. Englishman H.G. Wells’ War of the Worlds follows shortly after, around the same time, horribly and ironically, that Great Britain is deploying 1200 soldiers to destroy and plunder the West African kingdom of Benin. For the next century, our stories of Martians swing back and forth between the potential for diplomacy and the potential for annihilation, while Mars reclaims its namesake as the avatar of war.

Because the truth is that we do not have Martians to fear. Martians began, as I say, with misunderstanding, so what it seems we truly fear about Mars is that it not only reflects the light from the sun but the darkness within ourselves. The Martian invasion is our subconscious belief that we will be defeated by the worst of our impulses, that we will surrender Earth to the same airless desolation as entropy granted our cold red neighbor. We have told so many stories of Martian conquerors and colonizers because this is what we know of humanity on our own planet.

But: I could also be wrong.

There could very well be actual Martians, who have either through chance or action remained hidden from our view, a people who have tolerated our curiosity both as concept and as unmanned vehicle. A people who are either waiting for us to give up, or waiting for us to take one step too far. A people who have observed us as closely as we have been unable to observe them, and who have been maintaining their weapons with grim fastidiousness, knowing that one day they will have to descend upon us to wreak havoc. That as they decimate our cities and place the survivors upon confined plots of land, they will assure us that they are here to save us from ourselves. We will cry for mercy, asking what kind of god would leave us to such brutish fate, and the Martians will reply in however their matter-of-fact might sound:

The god you named us after, stupid.

People of Earth, we are, as I said, creatures of imagination. So I leave you to imagine this: What if there are Martians? And what if the Martians learned how to be Martians from what we said the Martians would be?

This entry was posted on December 17, 2019 by bilaldardai in Essay, Science, Write Club, Writing.