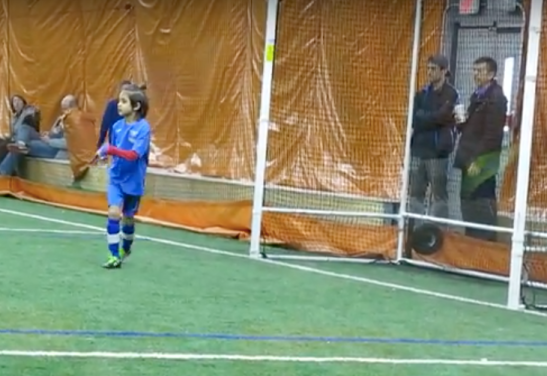 Shortly before the pandemic began to roar and ravage, before we agreed to define our lives by the radius we are willing to travel and the distance we keep from one another, the U8 and U9 soccer teams for which my son was playing goalkeeper completed their winter league indoor season. The U9s placed second in their division and the U8s topped the table after going undefeated. Robin and several of his teammates have been playing together for more than two years, and it had finally begun to show in the discipline, communication, and execution required for a soccer team to function well. Passes and shots were increasingly on target, crosses were being made into the box and finished with power.

Robin, for his part, was gaining greater confidence in the “sweeper” role he’d adopted after reading volumes of sports history books and watching hours of highlight reel featuring the world’s top-flight players using such a style at the position — legendary Russian “Black Spider” Lev Yashin; Germans Manuel Neuer and Marc-Andre ter Stegen; current World Cup-winning Frenchman Hugo Lloris. He was learning the art of the counterattack, distributing the ball back to his team with fierce kicks or gentle rolls, controlling the pace of the game and shouting commands with authority when he saw an opponent’s player left unmarked.

It is a relatively rare thing, I was told, for an eight year-old to gravitate towards the position of keeper at all, and rarer still to watch such a young keeper charge forward off their line to break up an attack, disrupting the rhythm of a striker who had otherwise encountered keepers who hold still and prepare for the shot. Throughout the winter season it would take an act of extreme will not to literally burst with pride as I listened to other parents talk about how vital Robin’s presence was to the team.

I have told others before that watching my son play soccer is one of the few unconditional joys I have in my life, and I am very careful with words like “joy” and “unconditional.” I have scheduled meetings and rehearsals as best I can around being able to go see him play. The 2019 spring season had seen many more lows than highs for his squad, but after the months of Saturdays he’d spent this past winter getting significantly better at the game we were all feeling confident about how this year might go for them.

That was, as I said, before.

He will wake up at 6:30 or 7:00 in the morning and ask to watch a documentary about the 1998 World Cup while he eats breakfast, and since there is no specific point in time when he must be at a school building, I cast aside all of my concerns about how much screen time he is getting and agree. We have taken to spending almost an hour a day in the back alley, shifting a pair of tall recycling bins approximately 10 feet apart to create an idea of a goal so I can deliver a series of shots in his direction, quickly disassembling the setup every time a car needs to drive through. I am aware of the inadequacy of our pitch, the divots and angles in the concrete, the way he can’t dive or slide the way he would be able to on grass or turf. He is not practicing with a team or defending against a rush of offense, but this is the best I can give him, the extent of how I may nurture his talents while we remain in quarantine. And it pains me to think of how much more he deserves and how little I can offer.

Nobody has ever asked me what I love about watching a soccer game; if the subject comes up at all it exists in the context of somebody deciding to tell me how ridiculous it is for any sporting event to end with a 0-0 tie. If they asked, I would tell them that the rarity of the scoring is part of what makes the game so special, that the release of energy from the players and the crowd when a ball finds the back of the net — or when a keeper blocks a shot that seemed destined to score — is a rush like few others in sport, the kind that often makes color commentators lose their minds and voices. Chaining together a series of perfect passes, runs, and clever footwork between 11 players and then ending with an accurate strike while 11 other players dedicate their lives, for 90 minutes, to stopping you, is difficult. When it works, it is rapturous.

But for me that’s maybe half of it, at most. I wasn’t regularly watching association football eight years ago. The truth is that for as much as I may have appreciated the game before, the fact is that I love soccer now because of how much he loves it.

I know so many people who have lost so much in the pandemic thus far, and I am immensely grateful for everything I still have right now. I hold that gratitude in the same heart that currently feels what this situation may be costing my son, and I wish I had the capacity to reconcile them both in a way that was more than either sorrow or anger.

This entry was posted on April 12, 2020 by bilaldardai in Fatherhood, Sports.