In the past few days, in addition to the story about the perfect game of Pac-Man, I learned a few other interesting tidbits about the strange world in which we all live. 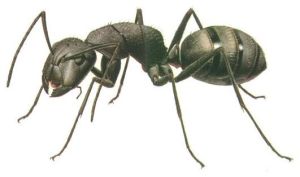 – Scientists have been documenting the activities of two “supercolonies” of ants; which are essentially a series of ant colonies that have decided to get along with each other, instead of fighting to the death as different ant colonies often do. Ants, like other hive minds, grow smarter the more of them there are, so I can only wonder what’s going on in the tunnels of these supercolonies. Particle physics experiments and water purification. I hope I’m not around long enough to read the headline “Colony Z645-7 Conquers Washington.” [1]

– Large corporations, including such family-friendly luminaries as Wal-Mart, have something called a COLI plan for their low-level workers. A COLI–or corporate-owned life insurance–is an insurance plan that pays the corporation in the event of employee death (in the insurance industry, this is often referred to as the “dead janitor” or “dead peasant” policy.) The worker’s family receives no benefit from this policy, nor do the employees even know that such a policy exists. A Wal-Mart employee who died of a heart attack recently netted his employer a cool $54,000 in insurance money. Understandably, some folks are upset, and with good reason…besides the fact that this is unseemly, the practice could lead certain unscrupulous store managers to rig up an unsafe working environment in the hopes of getting a COLI payout when Joe Public in Electronics winds up deceased.

– Fifty children in America starve to death daily. About two years ago, I was told that about 100,000 kids every year go missing in America, and the only response that registered was shock and confusion…THAT many? Where the hell do they go? At levels like that, it takes on the scope of a disgusting commerce, thousands of children exchanging hands like baseball cards…and it didn’t make sense then, it doesn’t make sense now, the number seems impossible for me to wrap my head around. I’m having the same problem with “50” now. I can’t see how anybody can be allowed to starve to death in a country that throws out so much food. I’m reminded of a line of “Arrested Development” lyrics…from “Mr Wendal”… “Uncivilized we call him/ but I just saw him/ eat off the food we waste.”[2]

Last night, I hopped on an open-mic stage for the first time in over a year, and read a poem entitled “An earthquake for reluctant lovers” (reprinted below for posterity). The last time I tried to do such a thing was at The Green Mill, the birthplace of the nationwide Poetry Slam phenomenon, and the poem I read there, a long prose piece about a serial killer and an issue of Newsweek, got me booed off the stage by two or more drunken slam poets. Last night I was at The Heartland Cafe, a much friendlier environment, and I did all right. My sister went up before me, and she was phenomenal. I may go back next week, I don’t yet know. Anyway, here’s what I read last night.

—
An earthquake for reluctant lovers

And when the last forsaken pressures of your imprisoned passions
awaken, there will be a yawn as the ground breaks and
these cities that you hide in, with all their private transportations
and tourist retractions,
cities with traffic lights persistently fixed on yellow, yelling out
doubt and misgiving, streets blocked off and avenues closed,
these cities that you hide in will fall—
tinted glass sharp and shattered,
concrete foundations cracking, collapsing
landmarks and monuments,
the grotesque graffiti splitting on long forgotten walls
their essays reduced to incoherence
your hotels and your theaters, your law offices of Won’t and Shouldn’t
your denials will be dust and smoke and ruin
you will stand, and stare at each other, bare
bloodied
knowing
through the haze of this destroyed hesitation, you,
survivors of the cities you surrounded yourselves with,
begin founding a city anew from each other,
flowing as if fountain, afire as if phoenix,
your concurrent blood coursing
your energies joined and joyous,
heat heralding construction like the sparks from a third floor scaffolding,
every building rebuilding
steel untwisted
cement unscarred
love unswallowed whole
and every streetlight being born, one at a time,
a cascade of amber both lusty and luminous,
disrupting every hiding place you used to keep inside.
—

I think that the battle has officially begun for The Summer Song for this year. By my criteria, a Summer Song is that sort of song that is sunny in both sound and disposition, very catchy, invariably a pop number, a radio favorite for a few months, and like the summer, fades into either obscurity or bad memories after the autumn arrives. Such recent examples include Len’s “If You Steal My Sunshine,” Smashmouth’s “All-Star” [3], or Sublime’s “What I Got”. This year, I feel that the strongest contender would be Sheryl Crow’s new single, “Soak Up the Sun;” I would even go so far as to argue that it has no strong competition at this moment. Crow, of course, is a repeat contender (or offender, depending on how you feel about this sort of thing) and returning champion, whose “All I Wanna Do” won this prize hands-down in the summer of 1995. Still, it’s only April. We shall see.

[2] Something I’ve never quite gotten over involves an option that occasionally popped up, regarding my college dorm meal plan. Every few months, OXFAM, an organization devoted to helping quell starvation, would ask dorm residents to willingly sacrifice one of the meals on their card for that week, and have that food donated to the hungry. What I didn’t understand was why it had to be done through these paperwork channels, with people signing up. Why wasn’t the leftover food being donated in the first place? Freshman year, I had a twenty-meal ticket, but I almost never made it to breakfast–so at least six meals a week were bought and paid for, but not eaten by, myself and all the other students who had the same habit. Were these given to OXFAM? If not, why not? Fifty kids a day. I don’t understand.

[3] Smashmouth is also a repeat contender and returning champ, having given us “Walking on the Sun” as their debut single. [5] And I’m not sure if “All-Star” still fits my criteria, considering how it slowly became the soundtrack version of the obligatory “Matrix” gag in films…something that appeared everywhere–not just “Mystery Men,” it’s first inclusion, but also at the end of “Rat Race” and the beginning of “Shrek.” [6]

[5] It’s noteworthy that the simple inclusion of the word “sun” in the song’s title is an almost surefire bid for this slightly dubious achievement, like actors playing handicaps for Oscars. [7] Still, the other criteria must be looked at if the Summer Song mantle is to be bestowed–Shawn Colvin scuttled her chances with “Sunny Came Home” by turning it into a melancholy meditation on loneliness.

[7] Sean Penn, I’m looking in your direction. What happened, man?

[8] And now I can’t remember the gag from “PCU”–there was a college film student trying to prove that at any given time, there was a movie on featuring either Michael Caine or (blank). At the end, he found a movie featuring them both, and his project was officially done. [9]

This entry was posted on April 18, 2002 by bilaldardai in Movies, Music, News of the World, Performance, Writing.