How monsoon is now? 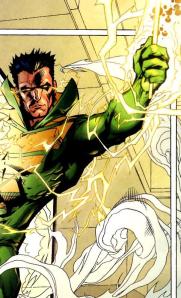 Sometimes it’s nice to think that supervillains exist, if only because the bastards at large in the world today are much less colorful but much more horrifying than Dr. Octopus has ever been [1]. Right now, I find myself preparing an airtight argument that the seasons are being manipulated by a nefarious evildoer, perhaps the Weather Wizard, or Climate Conqueror, or Season Scrambler, because after last week’s affirmation that there would be no real spring–a few weeks of winter leftovers and a trial preview of summer, but no spring, this week we’re being hit left and right with April showers. And, far be it from me to state the obvious, but it’s frickin’ JUNE. Can I charge late fees for this?

I received an email from the Artistic Director of new theater company Out Loud Productions, mentioning interest in two of my short plays. Both “A Good Excuse” and “Dawn’s Lover” have been performed before, but not in Chicago, and they don’t know that anyway. “A Good Excuse” has a very healthy lead on every single play I’ve written for number of times produced or considered for production; this brings the total to five. I’m having a bittersweet reaction to this, because although it’s great that I have a play so many people like enough to keep asking for, the play happens to be the clear crowd-pleaser. It’s the mainstream work. It’s not indicative of my larger body of work, which is being ignored for the hit single.

On the other hand, Shut Up, Bilal, because you’re a 24 year-old upstart in the wacky world of professional playwriting, and you can develop your Edward Albee temperaments [2] when you’re a fifty year-old. Knock it off.

Out of sheer coincidence, I ran into Gabrielle last night. She is a waitress at the bar I frequent with members of my acting class on Monday nights. She seemed well. She hadn’t changed, really, as far as I could see. But then again, it’s possible that I hadn’t, either. It was nice to hear her laugh, it’s a good laugh, it’s one I’ve missed. I worried for a moment that she’d seen the entry several months back where I placed my memories of her in order to clear up headspace, but then, it occurred to me that it didn’t matter if she’d seen it or not. It was my journal entry, and if she took issue, well, it happens. That’s beside the point, anyway. It was nice to see her again.

Need to speak with father about car. Ugh. Argh. Girlfriend thinks that I might be able to convince him to help me finance it, based on a few things–one, I’m clearly making progress in the acting/writing career track by living in the city, and two, it makes it harder to go see my family if I’m not as mobile as I could be. Mentioning the fellowship application would also help, I imagine, as it showcases blind determination to pursue career to monetary and emotional rewards, even if it requires a year in Los Angeles.

[1] It may be pointed out to me that for every foppish Spider-Man villain, there are your Dr. Dooms, and your Ozymandiases, and your Darkseids, who kill indiscriminately and maybe commit an atrocity or two if they’re feeling up to it. That’s not my point.

[2] Albee, from what I’m told, is notorious for his interferences in productions of his plays. The story that I always hear is how he showed up at a rehearsal to berate a director whose women for “Three Tall Women” weren’t tall enough.

This entry was posted on June 4, 2002 by bilaldardai in Life, Love, Plays, Theatre, Work, Writing.