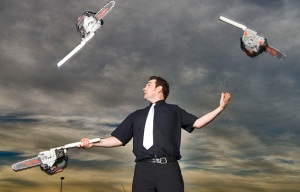 On Friday my workload was upgraded from “Manageable” to “Chainsaw Juggling.” As such, I’m working frantically to finish everything by their staggered deadlines, barely stopping to putz around on the Net, which in many ways, is a good thing. Summer hours have begun, so I can stay an extra hour getting work done [1] and reward myself at the end of the week by leaving work at lunchtime. But the workload is going to guarantee that I’ll be working these hours more or less solid.

Last weekend, in a fit of shopping, I bought six CDs, four of which were used, and at bargain prices. In order, I picked up:

Poe, “Hello” — A CD I’ve loved since I first heard it last year, and at a Used price, I decided it was time to have my own copy.

Lush, “Lovelife” — Another rare CD buy for me; I purchased this Used strictly off the strength of a single, but it’s worth noting that the strength of the single was such that I only heard it a few times in 1996 and I’ve never forgotten how much I liked it. [2]

Rage Against The Machine, “Renegades” — As much as I’ve loved the late, lamented Rage, I’ve only ever owned their debut, eponymous album. Since there are only four albums in the Rage library, I should work my way up to having them all, and now I have both of the bookends. “Evil Empire” was also on the rack, but I elected not to purchase it at this time.

Medeski Martin and Wood, “Uninvisible” — The full-price purchase, which I had to get simply because there are very few sounds as cool as those of MMW. This is their latest release, as far as I know.

Eurythmics, “Greatest Hits” — One of my favorite 1980s originals. Annie Lennox does nothing less than rule. Also, got it for $2 at a garage sale, along with several great books for fifty cents each, and a copy of “The Blues Brothers” on VHS.

Speaking of the last, saw TMLMTBGB again this weekend, and got to finally see the two guys who the group selected at the last audition. I like them. They’re good. I like knowing that they’re good. I signed up for this year’s Neo-Futurism workshop, taught by Greg Allen and Karen Christopher, because someday, years from now, they may need men again, and I want to be better trained to work in and handle their unique brand of theater. It’s strange to me, that the group still remains the pinnacle of what I want out of Chicago’s theater scene. Then again, lest we forget, two Neo-Futurists just walked away from New York City clutching Tonys. Then again, that’s not why I like them. I can’t shake the feeling that every time I talk about these guys, I sound like little more than a drooling fanboy.

Rained for all of twenty minutes this afternoon, clearly just to make the weather humid. Curse you, Weather Warlock.

[1] Instead of, y’know, writing entries in my LiveJournal.

This entry was posted on June 10, 2002 by bilaldardai in Music, Neo-Futurists, Theatre, Work.