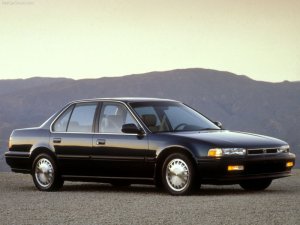 One journal entry that I never got around to writing was an obituary for my car. A 1991 Honda Accord with over 178,000 miles on it; about two weeks ago the car was parked at the side of the road near my girlfriend’s house and then failed to respond when the key was placed in the ignition. A jump-start had gotten the car back to this place, but clearly, one cannot go forever expecting a jump every time you want to go to the grocery store or what have you.

The Honda is an excellent car. I plug it here freely. It has lasted me through high school, through four years of my sister’s manic driving, through months of a long-distance relationship, two mild car accidents, through three summers and two winters longer than I ever expected it to, and I haven’t even taken nearly as good care of it as I could have. A week and a half ago, my dad and I called a tow truck to get the thing to a shop, to see if it had any life worth trying to save.

Turned out all it needed was a new battery. That’s all. Just that. It can run for three more years, said the mechanics. It’s in better shape than I had imagined it was even a year ago. The Honda Accord is an EXCELLENT car, and it lives.

Immediately after my car died, my computer did the same. This is also an old thing, that’s been sputtering and groaning and making terrible noises for awhile. I no longer write on this computer; I do all my writing at work or my girlfriend’s computer, saving things to hard drives and Zip disks that I can trust more than my growling Pentium One processor. In any case, I turned it on, and every time it got to such a point as a screen saver would be expected to pop up, the machine instead froze. I turned the machine off and then on, and when I tried to repair the problem via computer desktop tools, the machine froze again. And again. After a half hour of turning the machine off and on, waiting for ScanDisk to run its magic, and then repeating the process, I gave up and thought, “well, there go all those college essays I didn’t save to a Zip.”

But then, a few days ago, I turned it on and had no problems whatsoever. Worked fine. I turn it off when not in use, though, so maybe it still has screen saver freeze. But that doesn’t matter, because this morning I discovered that the monitor died overnight. I tried turning it on this morning and the little light flickered on and off like a goldfish trying to breathe next to the bowl, the screen blank but still bristling with static. The relief for me is two things: one, since these things come in threes, I was fearful of what the third electrical device would be that would die on me. My cellphone[1]? My toothbrush? Luckily, it was none of these things, but my monitor. And two, the other two things returned from the dead. So there’s hope.

Bryan, who is my dear, years-long friend, and current actor in my upcoming play, is alive this morning. This tends to be expected, mind you, but this morning I noticed that my Inbox featured an email written by him at 3 am, entitled “the near end of all things Bryan,” which would normally just be more Bryan silliness. But. Last night, Bryan rehearsed my play until 11:30 pm, and then began his way out of the city. While getting on the Kennedy at the Addison street ramp, somebody apparently fired a bullet through his rear windshield. Bryan is all right, but shaken up. He may need me to pick him up and drop him off at home tonight, since he may not have a car that he can safely drive. We’ll see.

Last week, I discovered that Gary Ambler, a theater professional from Urbana whose work I have seen before–most memorably as the psychiatrist in a performance of “Equus,” in which he was marvelous–came up to Chicago with his new theatrical company to perform a Harold Pinter play, and while he was here, he was accosted by three youths in Oak Park and shot in the leg. Ambler survived, although the production cannot, and he won’t be up and walking again for a year [2]. I do not know Gary Ambler. Nonetheless, it was upsetting to discover that he’d been injured and nearly killed.

I need to work on designing the program for “Accolade.” I’d like to make it look like a small film promo poster, or like an Academy “For your consideration” ad. The latter may be easier. I’ll see. I may not have as much time as I’d hope today.

I’m glad that Bryan is alive. I’m going to be remembering that all day.

[1] A few weeks back, I had an interesting experience with my cellphone. I have a Voicestream phone, and when I can receive a signal, the LCD shows me the word “Vstream” (or “Voicestream,” I’ve discovered, depending on where I am in the country). Some weeks back, I looked at the phone and saw the words “AT&T Wireless.” Imagine my surprise. I wondered if I’d just witnessed a corporate takeover. A few minutes later, the familiar “VStream” reappeared. And yet, I wondered if now was the time to buy AT&T stock and sell off my Voicestream shares. Then I remembered that I had neither the money to buy stock nor did I actually own any shares of Voicestream. And all was well in the world.

[2] This story caused me to darkly muse that Chicago is not the safest city in the world if you’re a male theater professional with the initials “G.A.” I say this because the only other theatre artist I’ve heard of being shot in this city is Greg Allen, founder of the Neo-Futurists. Both Greg and Gary are alive, mind you, but they have, for Godsakes, both been shot.

This entry was posted on August 14, 2002 by bilaldardai in Life, Obituary, Theatre, Writing.