In all seriousness, have Electronic Arts and Maxis Interactive not realized the profit potential [1] of creating a game in which the Sims are forced to deal with the threat and aftermath of Armageddon? Instead of spending your hard-earned cash on new carpeting and an aquarium, you could fortify your house with steel barricades and base your relationship scores on how many people in what’s left of your neighborhood look to you for protection from the rampaging mutant hordes outside?

No? Oh well. For a chilling vision of the Middle East to come, have fun with this Civilization-inspired wackiness from Idleworm. 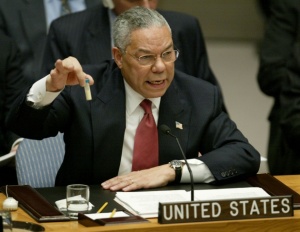 I like Colin Powell. I respect the man more than any member of the current administration, and it appears I’m not alone in feeling this way. So I can’t help but still feel empathy for him when he gets up in front of the United Nations and spouts a decent, but not damning, presentation of why our President is gung-ho on invasion. But perhaps I just don’t want to believe he’s completely on board. I think it would crush my spirit immeasurably to find out that Powell was just another member of Team Rove.

Of the many responses to Colin Powell’s presentation, the one that struck me the hardest was one made by Joe Conason. Powell tried to present a credible link between Saddam and al-Qaida by showing the Assembly satellite photography of an al-Qaida training camp in northern Iraq. Northern Iraq is Kurdish; the Kurds have no love for Saddam and we have a fairly decent ability to mobilize within that territory. Conason’s question, and it is a good one, is that if we know an al-Qaida training camp exists in an area we can mobilize within, then why the hell haven’t we blown it to bits already?!

Wednesday night’s episode of The West Wing, the first one of the season to really live up to the promise of the show, set my head on fire. The episode dealt with the American response to the mass tribal genocide in a fictional African country–by which I mean it dealt with the American non-response. It was a tight and powerful hour, capped by images on a screen of dozens of bodies lying in the streets…horrifying because they used real footage from Rwanda.

And even more horrifying was the discovery that my friend Brad, who does his best to at least read the headlines in the daily paper, had never heard of Rwanda, or of the massacres that now have claimed millions of victims. And here’s the problem with American foreign policy, writ large. We’d like to believe, and our propaganda makes a point of stating, that we’re a “beacon of freedom,” that we’re the good guys, the white hats, ready to come charging to the rescue the second we hear somebody scream “Help!” We won World War II in the role of cavalry, and never got over it.

We’ll charge around on our white horse, true, but we make a point of saving the pretty ones first. And the rest we leave tied to the tracks to be killed by the oncoming train. Two quotes that I ran across this week:

“Why not go to war for oil? We need oil.” –Ann Coulter [2], addressing members of the recent CPAC convention

Some days it’s harder to have hope for this great nation of ours. And they’re not as few and far between as one would hope.

[1] Not that they need it. Last year, I read that The Sims was essentially a license to print money, and the statement wasn’t too far off.

[2] I’m told time and again that it’s not fair to use Ann as a quotable, because she’s clearly Out Of Her Mind. I contend that despite this, she manages to hold onto a frighteningly large audience, and we ignore her poison at our own peril.

This entry was posted on February 7, 2003 by bilaldardai in Games, News of the World, Politics.