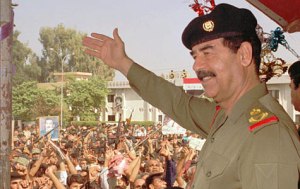 Continued speculation on the whereabouts of the world’s most notorious Iraqi led my friend Tofu to muse that maybe he’s been on vacation all this time, and which leads now to the following short sketch:

TARIQ AZIZ and SAEED SAHHAF sit in a battered stone room, lit dimly by a flickering lightbulb, looking over war plans. SAHHAF is taking notes. An IRAQI CIVILIAN sweeps up the dust and pebbles that have come loose from the constant bunker-buster bombs.

AZIZ: (pointing at a map of Iraq) So, right here, it appears that the Anglo-American military has decimated our forces and captured hundreds. Cluster bombs have obliterated our front line in Nasiriyah. And despite the persuasiveness of our Fedayeen, small pockets of Iraqi traitors have been rebelling in Basra. Read the statement back to me.

SAHHAF: (reading his notes) “The devils have been defeated by our faithful followers and by the will of Allah. Soon they will return to their festering lands, licking their wounds. The Glorious Saddam remains in control. God is Great.”

A LOYALIST enters the room.

LOYALIST: Excuse me, Vice President Aziz, Minister Sahhaf. You had asked me to inform you if…

SAHHAF: But it hasn’t been a month yet!

AZIZ: It couldn’t be.

SAHHAF: Are you sure it is not one of the lookalikes?

LOYALIST: Yes, Minister. Abdullah is in northern Baghdad, Farhad has been in the south anteroom with the al-Jazeera reporter, and Feraz has been dead for three days.

AZIZ: What about Salman?

LOYALIST: Back in surgery. His mustache began to wilt.

SAHHAF: Then it is him. How soon?

SADDAM HUSSEIN enters, wearing a beret and a Hawaiian shirt. He seems nonplussed.

SADDAM: Gorgeous. You should go someday.

AZIZ: You’re probably wondering how the country is doing.

SADDAM: Why yes, Tariq. As a matter of fact, I am.

SADDAM: Is that why, when I got off the plane at my own airport, I’d discovered that the airline had lost my luggage?

AZIZ: They had? An outrage! We will have the baggage handlers imprisoned at once!

SADDAM: No, you fool. The airline lost my luggage because a bloody great bomb landed on the baggage carousel!

AZIZ: Oh. Well. Still, I assure you, this is an isolated incident.

SADDAM: I’m very disappointed in you, Aziz. In both of you. It’s been years since I’ve been able to take Uday and Qusay on vacation. All the time, work, work, work, torture, torture, work. I needed a break. I deserved a break, would you not agree?

SADDAM: A simple sabbatical to recharge the batteries. I asked only three things of you when I left. Do you remember what these things were?

SADDAM: You do? What were they?

AZIZ: That you were not to be disturbed.

SAHHAF: To take care of the cat.

AZIZ: (sighing) To not lose our stranglehold on the country.

SADDAM: One simple thing. And you couldn’t even do that.

SADDAM: What about Mr. Softpaws? You forgot to feed him?

SADDAM: Poor thing. Obviously scared by all the loud noises.

AZIZ: No, Saddam. We mean he defected. Our Fedayeen reports that Mr. Softpaws was in Umm Qasr, leading the foreign devils to our positions.

SADDAM: No! I will not believe it! What could the evil Americans have possibly offered to Mr. Softpaws?

AZIZ: Intelligence reports are spotty, but it appears that he has secretly been receiving Meow Mix from them for months. We found bits of kibble hidden under your royal bed.

SAHHAF: He asked for it by name.

SADDAM: This is most disheartening. I thought that your work during the inspections was exemplary, Aziz. I thought that you were ready to handle a bigger project like staving off the invasion of the country. Clearly my faith in you was misplaced.

AZIZ: We can fix this, Mr. President. Give me more time.

SADDAM: You’ve had enough time, Aziz. I’m afraid I’m going to have to take you off this project. Perhaps in time, you will learn how to better handle yourself in my absence. If ever I go on vacation again, that is. Get out of my sight.

They exit. SADDAM looks at the IRAQI CIVILIAN.

SADDAM: I have a business trip to go on in a few days. Do you think you might be able to watch the regime for a week or so?

This entry was posted on April 4, 2003 by bilaldardai in Plays, Politics, Satire, Writing.