“I had become more and more enraged and mystified by the idiot decisions made by my countrymen. And then I came suddenly to pity them, for I understood how innocent and natural it was for them to behave so abominably, and with such abominable results: They were doing their best to live like people in story books. This was the reason Americans shot each other so often: It was a convenient literary device for ending short stories and books.” 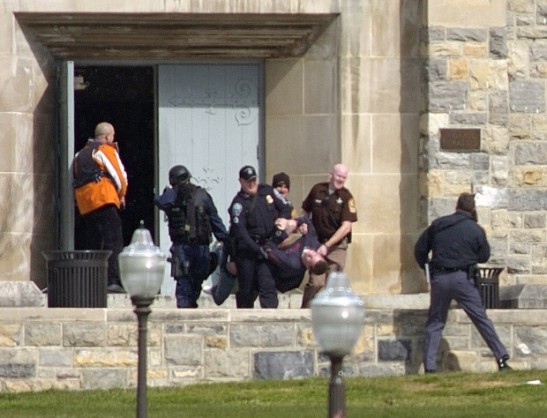 I feel for you, MSNBC. And you, CNN. I even feel a temporary fade in my loathing for you, FOX “News.” I can understand (and indeed, hope) that it might have been a tough call for you to decide whether or not to air the multimedia manifesto of Virginia Tech shooter Cho Seung-Hui, mailed to your offices shortly after he’d committed his first two murders and shortly before he would commit his next thirty. It was a cruel coda to his atrocity to have made such a missive and to have sent it to the national media outlets, and it does place you in a bind, as your purpose is to dispense the story in as much detail as you have reliable confirmation thereof. This is a gigantic story, something that will not go away soon; the fact that he crafted a final testament is a part of that story and there is a certain value to the general public seeing it for themselves rather than being told of the contents.

But you did, of course, realize that dispensing this particular detail was to play directly into the hands of a fiend, who wanted nothing more than the notoriety that would live beyond his own suicide. In the end he held you hostage as well, daring you to either give him what he wanted or to sacrifice your own instincts as a news outlet.

You caved into his demands. Of course you did. Corporations die for too much principle, and for whatever services you wish us to believe you provide, you are still corporations competing with each other for our attention…and you get that attention by giving us new and interesting stories, things that shock and amaze us. We feed you our unblinking gaze and you feed us narrative. You give us the news, we take the news, we make the news, we are the news. You give ourselves back to us in glossy format with sound effects and CGI and even when we hate you for it we love you for it.

Still, I can’t help but feel disgusted when I find paragraphs like the following in an article about one of the gunman’s victims:

Images of the armed Cho, wearing black gloves and dressed in a khaki vest have been burned on the public consciousness, as has his screed of hateful words targeting the wealthy and privileged.

Fascinating that you should point this out, O Media, considering that it was you who burned the images into the public consciousness in the first place.

How smug.
How self-satisfied.
How dare you.

I am not crying “shame on you” for releasing the video in the first place. I prefer a society where more information is available and can be avoided or absorbed willfully, to the alternative. But to celebrate yourself for going from narrator to protagonist in this ugly, tragic incident is a hideous action, and for that I deeply wish you are ashamed.

I doubt you are. But you should be.

This entry was posted on April 19, 2007 by bilaldardai in Critique, Essay, Language, Mental Health, Politics, Society.