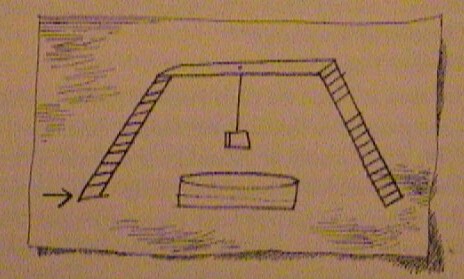 In Roald Dahl’s Charlie and The Great Glass Elevator, the American president is a braying, buffoonish man named Lancelot Gilligrass, surrounded by sycophants and constantly distracted from the duties of leadership by inspirations for “brilliant” inventions.

His flytrap, for example, was described as a small bridge, suspended between two ladders. The fly would climb up one ladder and start to cross the bridge. Halfway across the bridge, the fly would notice a hole that led to a sugarcube, suspended over a pool of glue. The fly would of course be tempted by the sugarcube, but would also notice the glue, and therefore would not go after the bait. Thus, said Gilligrass, the fly, feeling pleased with himself, would continue along the bridge and begin climbing down the opposite ladder.

But Gilligrass had purposely left a rung out of the opposite ladder, and the fly, failing to notice this, would therefore fall and break its neck.

It’s a stupid idea, but at least it’s fictional. At least when Gilligrass comes up with a convoluted plan based on no actual evidence or logic, all that happens is an imaginary fly escapes death.

In the real world, our President keeps attempting to extend his massive bloody Iraq adventure by telling us to trust him that his new plan–which is really the old plan, only bigger–will work if we only give it another few months or so beyond the few years or so he’s already been given. Every other professional in the world gets either reprimanded or fired when their half-baked assertions lead to a four-year history of blustering failure, but the Decider Commander Guy?

No, he gets the benefit of the doubt.

When they were the Minority Party, most Democrats quaked at the prospect of confronting Bush on the war because they feared the reprisal from the Republican Majority. Now they have the power granted them by a weary, angry electorate, and they still back down, even to a weakened, scandal-plagued boy king.

So let us take note. This Memorial Day, Congress has chosen to fund a plan that ensures we’ll have many more dead soldiers to remember by this time next year.

In the next election, maybe we should replace most of them with sparrows. At least sparrows know how to respond when the President discusses yet another inane flytrap.

This entry was posted on May 25, 2007 by bilaldardai in Books, Politics, Society.