The bright side of a relatively underproductive period. 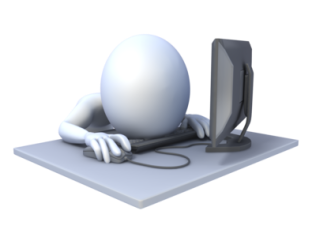 Early last week, the PC that Dana and I inherited from my brother-in-law in February began making strange noises, and then refused to boot up when restarted. So we took it in to Best Buy to have it serviced, and hopefully have the data recovered.

After about ten days of waiting and an upsetting chunk of change, which included having the hard drive replaced and the original shipped off to Iowa for examination, the final prognosis is that everything added to the computer since April or so has been lost. Actually, that’s not entirely true. It’s only probably lost, but if I want even the slightest hope of recovering the data, I have to be willing to pay Best Buy $1,599 to take apart and reassemble the hard drive.

That number again is ONE THOUSAND FIVE HUNDRED AND NINETY-NINE DOLLARS.

I told the technician, an “Agent French,” to forget about it. So everything since we last backed things up–again, that’s about three months ago–is gone.

(Yes. I know. I do not update it as regularly as I should. Nothing you can say to scold me will match the scolding I have already given myself.)

However, as I gnashed my teeth at the situation, I gradually began to realize that the situation is not nearly as bad as I first believed. As I’ve been out of Too Much Light for most of the spring–due to focusing my time and energy on The Permanent Way and Vox Pandora–I had very few of those plays disappear on me…and besides which, everything is archived at the theater offices, so all I have to do is make copies and retype. A minor hassle, but nothing insurmountable. Outside of TML, most of my writing time was spent working on Vox, and I know for a fact that I have a final draft copy sitting in my Gmail attachments (as it was sent out to a theater in Pittsburgh via a friend of mine).

But everything else? All those other plays I’ve been so frustrated and depressed about my inability to write? The mocking blank pages that followed the title sheet for Contraption? Well, you can’t lose to computer failure what you never started typing on the computer in the first place.

At this point, the biggest pain is going to be reassembling the music collection, as I’m sure I downloaded a number of songs from iTunes and ripped a few CDs from friends since April, so now I need to determine what the library is missing. Also, we’ve lost almost every digital photo we’ve taken in that time, which includes our first shots of the new dog, and the handful of saved games from my recent, purposely distracting stress-relief restart of Grand Theft Auto: San Andreas.

But all things considered, not a complete disaster.

(Although for some reason, my computer no longer has sound. Apparently they never reinstalled the sound drivers when they gave me back the computer. Which sucks. Again, again, not a complete disaster.)