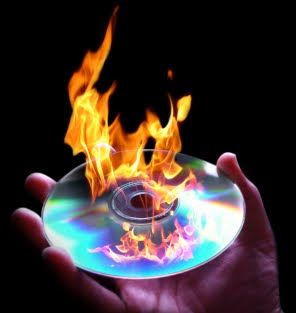 I noticed today, on the bike ride home, a song lyric that had, through no fault of its own, been reinterpreted through the prism of technological advancement.

And Greg he writes letters/ and burns his CDs…

The album that this song appears on, Under The Pink, was released in 1994. If I recall correctly, from my days when I knew the extensive back story behind every single abstract Tori song, this song was inspired by a fan who mentioned in a letter he was contemplating thoughts of suicide.

In that context, to say that Greg was burning his CDs was to portray his behavior as destructive, as a sort of purging of his collected artwork, possibly as a precursor to leaving his mortal shell behind as well.

In 2007, however, when people say that they are burning CDs, they are usually recording new audio discs, not setting fire to existing ones. And in that context the entirety of the song becomes altogether more complicated by the possible work of making something new, of committing to an task that might otherwise preclude the act of killing oneself.

The word is burns, and in a decade and a half it has, at least when coupled with the object of a compact disc, come to mean both destroy and create at the same time.

I am fascinated by this.

I am also very tired. So take this observation with that grain of salt.

This entry was posted on July 13, 2007 by bilaldardai in Biking, History, Language, Music.