Why This Why For Why Not Why Bother.

And there’s this question of relevance hanging in the air like a swarm of locusts frozen in flight, buzzing with vicious hunger, not understanding what the hold-up is, knowing that they cannot be stopped and therefore finding the halted momentum utterly intolerable. 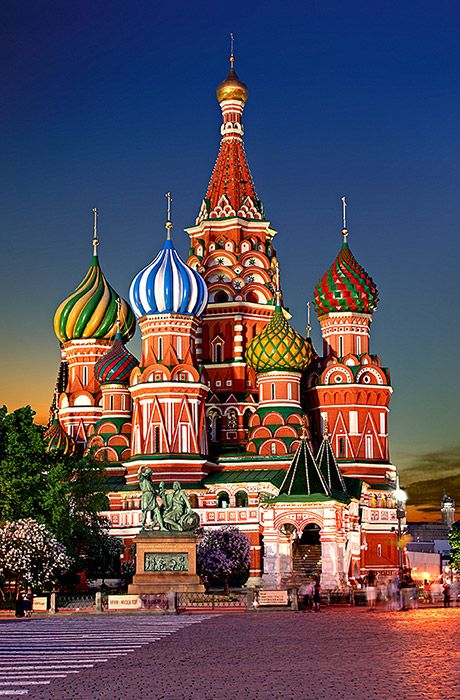 I am rewriting a play I wrote five years ago entitled In The Eye of Ivan, which some of you may recall if you were reading this journal that many years ago. It relates a historically fictional account of the architects of St. Basil’s Cathedral in Moscow, which was commissioned by Tsar Ivan IV of Russia to commemorate a victorious conquest of the Tatar people.

Ivan IV is better known by his colloquial title “Ivan the Terrible,” for numerous reasons, including the possibly apocryphal tale that he had the architects of the above pictured cathedral blinded after they had finished, in order that they would never build a structure that could surpass it.

There are several conflicting accounts of who the architects were and whether or not Ivan the Terrible in fact had them blinded. Some versions claim that there were two architects, named Postnik and Barma, others claim that Barma was Postnik’s assistant, others that there was only one man, Postnik, nicknamed Barma, others that Postnik was Barma’s nickname. Some versions say that they could not have been blinded because they later designed the chapel of St. Basil’s tomb that was added onto the cathedral…and others say that they designed this chapel despite being blinded.

The wonderful thing about telling a story that nobody can agree on is that your account doesn’t have to answer to anybody. My version posits that there were two men, that they were blinded, and that they reunited later in their lives to build the addition despite their blindness. Somebody who feels differently is free to write their own story.

I am rewriting this play right now because it is in fact a very bad play1, something that I was only able to determine with five years of writing in between me and the last draft. I have burned through the first half of the play in the past two weeks and changed almost every line in some way or another; I have reconsidered my plans for the second half and made a conscious effort to add second and third dimensions to characters that were little more than talking set pieces in the original version. I am experimenting further with time and memory shifting and in double-casting actors. I am imagining a scene I lacked the emotional maturity to even consider five years previous.

I summarized the above to a colleague recently and was asked the relatively simply question “Why?” As in, “why tell this story?”

I don’t recall what I said, but I am aware that it was a weak and stammering response. I’m actually quite incompetent at the practice of justifying my own existence, so I didn’t have any sort of elevator speech prepared to adequately express the themes I believed I was trying to explore in the piece.

None of that made it into my brain or out of my mouth. I’m sure I was incredibly impressive.

And yet, thinking about it today, as I begin revising the second half of the work, I realize that while the above ideas are present in the narrative and that I do wish to explore them in a theatrical setting, that the simplest answer to the question is that I wanted to tell a story about two specific people.

An author I once read or heard speaking–it may have been Neil Gaiman–once tried to make it clear to the audience that humanity was an endlessly interesting concept; that all of the best stories are not about ideas but about people having those ideas, implementing those ideas, falling victim to those ideas.

Since revisiting the research on this play I have been coming back, over and over again to the below painting by Ilya Repin, entitled Ivan the Terrible and His Son Ivan on November 16th, 1581, which relates the moment that the Tsar accidentally killed his son with the sharpened end of his cane after a ferocious argument between the two. 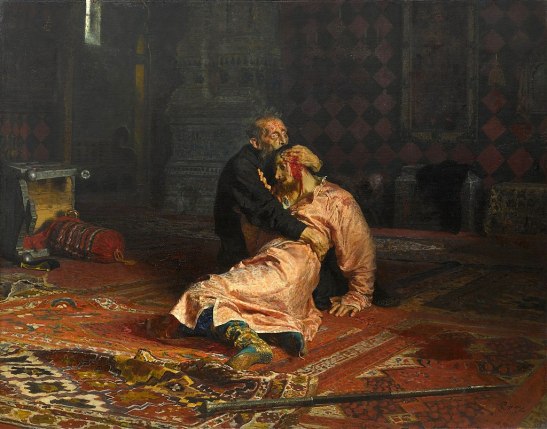 The different expressions on both of their faces haunts and moves me, because they’re both asking the exact same question:

“What have we done?”

Yes, the forgiveness, the redemption, the life-after-tyranny stuff, that’s there. That may be the sort of thing that allows a play about Russia in the 1500s to be taken seriously as “relevant” today.

And my questions, back to the swarm of frozen locusts, is “Aren’t human beings always going to be relevant? That is, until there are no humans to speak of?”

1 Admitting that was, I have to say, an especially bitter pill to swallow, since the last draft was what earned me a $7,000 Illinois Arts Fellowship in 2004. I find myself stunned that it was given such an honor, because rereading it now was excruciatingly painful, like reading the doggerel poems one writes in third grade as part of an introduction to rhyme and meter.

When I received the Fellowship in 2004 my reaction was an ecstatic yelp of pride. Four years in the future, I had no idea I would look back at the judges and wonder “Were you high?”

This entry was posted on March 21, 2008 by bilaldardai in History, Paintings, Plays, Theatre, Writing.