On the entertainment value of train wrecks. 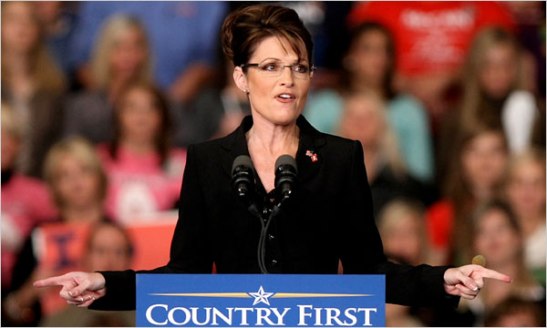 My intent is to watch the Vice Presidential Debate tonight, after minutes upon minutes of footage showing Alaskan Governor Sarah Palin as a dissembling, substance-free caricature of political acumen, her speech seemingly cobbled together from phrases found in right-wing blog comment sections, her defensiveness built entirely on the idea that even an innocent question asked by a member of the LIBERAL MEDIA! is suspect.

Evil Liberal Reporter: My guest tonight is Alaskan Governor and Republican Vice-Presidential nominee Sarah Palin. How are you feeling this evening, Governor?

Sarah Palin: Let me start by saying that my welfare is that I am fit enough to lead the country. And that welfare is something we do not want people to be on, which is why I and John McCain if we are so blessed as to be elected as President and Vice-President will create many jobs for ordinary, hard-working Americans who are born in America because they were not aborted by the Hollywood elite. And John McCain and I are committed to making sure that all Americans are feeling well today, which is why I keep an eye on Russia.

Sarah Palin: Oh, as if you know anything about God. John McCain and I, we want there to be God everywhere in American life, which includes in our families and our military, which we will make strong. I believe that God wants America to believe in God, and when John McCain and I if we are so blessed to be elected are elected will make sure that taxes are kept low for our families in harm’s way. We are just sick about this crisis. Although my welfare is fine. And so is John McCain’s welfare. But even if his welfare were not well, I could be President. I have executive experience as Governor of Alaska. I cannot understand how people could think that my experience as Governor of Alaska would not qualify me to be leader of all Americans if we are so blessed as to be elected and if God forbid something should happen to Senator McCain.

ELR: Yes. Yes, I see. Our guest tonight is Alaskan Governor Sarah Palin. We’ll be back after these messages.

Sarah Palin: You wouldn’t be going to commercial if I were Joe Biden. Witch.

So there is a part of me that is expecting that the night will continue to bring more of the same nonsense, and that there is a degree of unintentional hilarity to be found in the event.

But I am sobered by the idea that the calories I burn while I laugh may be the only productive thing to come of the debate. Palin’s die-hards are her die-hards and if after weeks and weeks of demonstrated habitation of the area outside of her depth they cannot be swayed to realize that John McCain has played a gamble with the American government as dangerous as hoping for an inside straight draw, then nothing she does tonight will have any effect. Her words do not matter, nor does her ability or inability to string those words together in any meaningful way. She is an iconic image, like the cheerleading squad of your hometown football team, and you love the cheerleaders even when the team on the field plays lousy football.

Of course, the cheerleaders have no actual power or ability to affect the game, but they sure are cute on the sidelines there, riling up the fanbase.

I cannot share the glee of those who are looking forward to tonight as the moment that McCain’s campaign officially yields momentum to Obama. I cannot bring myself to emotionally invest in the outcome of this debate. Even with the train wreck I expect to see, that I expect to gape at in stunned fascination, I remind myself that it is best to keep a safe distance, because what I see as a horrific accident somebody else is going to see as a wicked cool display of physical force.

This entry was posted on October 2, 2008 by bilaldardai in Fiction, Politics, Society, Television.