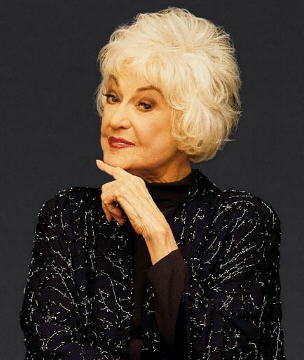 I was not a fan of either The Golden Girls or Maude, so even though I could appreciate Bea Arthur’s talent for a snappy line reading, I don’t feel that somber sense of loss at her death that I feel when my genuine heroes and inspirations pass away.

Nonetheless, Ms. Arthur’s always going to occupy a place in my memory for a roundabout reason…

The year I graduated from college, in the last few months of my undergraduate career, I’d started working with the improv/sketch troupe Jezebel’s Lunchbox. At our first show, we played a game of “Party Guest,” in which a small group of improvisers enter the scene one at a time acting out individual suggestions from the audience, and the host or hostess is required to guess who or what each guest is portraying.

When he entered the scene, even those of us who knew what his suggestion was were confused by his performance. If it was supposed to be an imitation of Bea Arthur, it was so off the mark that we didn’t know what to do with it. The host was befuddled. Lavery wasn’t even going to the over-obvious clues; wasn’t talking about, for example, how he felt a kinship with that expensive statue of the goddess Diana in the room, since they were both “golden girls.”

When we asked him afterward, we discovered that he had misheard the suggestion.

He had thought that the audience member had asked him to “Be Arthur.”

And the host didn’t guess that, either. I’m still not sure how we got out of that scene. I don’t think we did. I think the host just gave up.

And that’s how I will always remember Bea Arthur; not for who she was but for how her name was once misinterpreted.

There are worse ways to be remembered.

This entry was posted on April 25, 2009 by bilaldardai in Eulogy, Performance, School.