This is both of those. 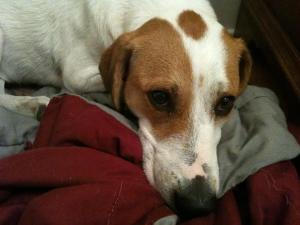 After weeks of desperate problem-solving and angst and ultimately our total heartbreak, my wife and I came to the conclusion that ours is no longer an adequate home for our younger dog, Cassie. She’s a five year-old coonhound, going on six, but her puppy tendencies have never fully subsided despite all manner of training and discipline–she simply needs more attention and exercise than we are now able to provide, between our new work schedules and the demands of an infant child. Although I’ve never personally been worried about her behavior around Robin–the two have gotten along very well together, even when he bats at her head a touch more than tenderly–I also know that with the drop in her outdoor activity she’s become more excitable at any prospect of play, more destructive when suffering boredom. When the doorbell rings she stampedes toward the door, not realizing that there may be a crawling baby in her path. Any toy or pacifier thrown on the ground without our knowledge is eventually discovered and mangled by her insistent jaws, and there would be cause for concern on the day that Robin begins to understand ownership and attempts to take back his property by force. In a perfect world Cassie would be able to go for jogs with my wife the way they used to before my wife got pregnant; in a perfect world we could devote a couple hours a day to bundling up the baby, letting Cassie hop into the trunk, and taking her to the dog beach at Montrose. In a perfect world the developers of the grassy lot two blocks south of us would have allowed the neighborhood to maintain it as a dog-friendly area, as it had been for years, instead of deciding that it should stay locked and unused except during high school football season (in a perfect world the irresponsible dog owners who didn’t clean up their pets’ messes wouldn’t have ruined it for the rest of us). I have a lot of blame, rational and irrational, to go around for the situation at which we’ve arrived. In a perfect world I would never have made the life choices that meant I would not have the means to continue caring for this loving, infuriating, adorable creature.

I’m avoiding the logical progression of these sentences.

Because it has become, despite all of our attempts to rationalize and strategize, a near-impossible situation to have Cassie remain with us, we need to find her a new home. Both Dana and I are absolutely dead-set that we will not send Cassie back to Anti-Cruelty, where she had first been deposited as a trembling, neglected six month-old called Shelby, fresh off of a truck from Tennessee. When we adopted her she underwent her hysterectomy and was released from medical care in a span of hours, placed in our car still groggy from the anesthetic, still grungy from the shelter cages. She caught pneumonia within 48 hours of arriving home and we spent a long evening at the animal emergency room, spending $2,000 we didn’t have and signing forms that gave the doctors consent to put her to sleep if her suffering was extraordinary.

We will not send her back to a shelter. There is already on my conscience my utter failure at being able to keep her; I will not live the rest of my life, as I am sure I would, envisioning the rest of hers surrounded by cold concrete floors and steel bars until she became ill enough to be taken down the hall and poisoned. I’m aware that there are no-kill shelters but I also know how they seem to be in a constant state of at-capacity.

She’s gone from a dog who hid from new humans to one who readily trots up to them and sniffs at them deeply. She loves to chase balls and errant socks and the beams of laser pointers. She does not make friends with every dog she encounters but the ones she likes she Loves. She has a darkly eye-lined face that reminds one at times of Margot Tenenbaum. Her bark is crisp and sharp and occasionally inappropriate, her bay classically hound-dog. When you hold a treat in your hand she sits intently and sweeps a half-circle across the floor with her tail. When I run down the hall she gallops joyously after me and slides headfirst like a star baseball player. On evenings that my wife has been out of town I have slept on the couch with her curled up contentedly in the crook of my knees.

It’s as easy for me to write all of the memories and reasons I love this dog as it is hard for me to write that I need to find her a home that is better suited to take care of her.

This is the sentence where I ask to be contacted if yours is that home.

That was, perhaps, the hardest one of all.

This entry was posted on December 12, 2012 by bilaldardai in Action Items, Dogs.