Below is the text and an audio recording of my piece from this past weekend’s installment of The Paper Machete, performed at The Green Mill in Chicago. I was recorded by Brian Heath and introduced by Josh Zagoren (as Chad the Bird).

This past week, eyes and ears and Facebook avatars across the nation were focused on the oral arguments regarding the equal rights and protections of gay Americans. With media attention fixed completely and thoroughly on this defining issue of our times, we were blissfully spared a scene in which several grown men argued over whether or not to indict a groundhog for fraud.

That was a report from an alternate America. When we finally develop the technology, you should go visit. It’s fascinating. The Second Amendment was written specifically to refer to muskets, corporate tax increases directly fund infrastructure and arts education, and Antonin Scalia is the owner and proprietor of the third most popular cheese-steak shop in south Philly, where the local children all refer to him as Uncle Antie.

In this America, we were indeed subjected this week to a reality in which Michael Gmoser, chief prosecutor for Butler County, Ohio, drafted and issued an indictment against noted rodent meteorologist Punxsutawney Phil. 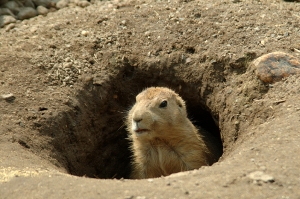 “Punxsutawney Phil,” read the indictment, “did purposely, and with prior calculation and design, cause the people to believe that spring would come early.” The groundhog was charged with “misrepresentation of spring,” “a felony against the peace and dignity of the state of Ohio.” Gmoser announced within his indictment that he sought the death penalty for the groundhog on the aforementioned charges.

Now, we should give Mr. Gmoser the benefit of several doubts here. We must assume that he has issued this indictment with tongue firmly in cheek, a wry response to the continuing frigid weather in Ohio. We should assume that Mr. Gmoser knows better than to seriously advocate for capital punishment for a crime that normally carries a maximum penalty of fines and short prison sentences, because we wouldn’t want to believe that the death penalty in America is unjustly handed down to certain classes of defendant moreso than others. And perhaps we should applaud Mr. Gmoser for, one could surmise, clearing out the usual gridlock of the court system and earning himself enough time to embark on an imaginary crusade against the offenses of a nine-pound animal in Pennsylvania.

This indictment was rescinded a few days later, after Phil’s handler Bill Deeley confessed to misinterpreting the prognostication related to him by the groundhog. Although linguists have yet to offer a comprehensive study of the groundhog language, we must trust the word of Mr. Deeley, and ponder perhaps if groundhog is a language similar to certain Asiatic vocabularies, containing a multitude of subtle nuances. Perhaps there are several different ways a groundhog can say “six more weeks of winter” or “oh god what is that scary thing on the ground that’s shaped exactly like me.”

And so, in this reality, in our America, we allowed ourselves a three-day distraction from the usual array of frightening and frustrating stories about butchered boyfriends and rape apologists and babies shot dead in their strollers. I stand here and snark, ruthlessly so, but I do, truly, appreciate that I live in this America, rather than another alternate America, where an alternate Butler County prosecutor has stepped beyond the boundaries of satire into full-on lunacy, where the ongoing press of winter has snapped his mind like that of Jack Nicholson’s in a remote mountain hotel.

In that America, Mike Gmoser issues the indictment and announces his intentions to the gathered reporters with a stiff-lipped expression that is at first assumed to be a particularly severe deadpan. He refuses to take any questions, but leaves the podium with an ominous promise that justice will at last be served. As the week moves on, his staff begins to grow fearful that what seemed at first light-hearted has started to tilt ever so slightly off the rails. Gmoser locks himself in his office for hours on end, barking off the Latin name for the groundhog species and asking his paralegals to calculate the exact amount of wood a woodchuck would chuck if a woodchuck could chuck wood. The jovial rejoinders from the Punxsutawney Groundhog Club are met with ferocious and escalating barbs. An extradition order is filed, demanding that the “heinous monster and confidence artist known as Punxsutawney Phil” be transported to Ohio to stand trial.

The order is denied, and Gmoser files additional charges against the entire Groundhog Club Inner Circle for aiding and abetting. A small cadre of Ohio State troopers who go bowling with Gmoser on Wednesday nights is dispatched across the border to take the groundhog by force. The ensuing shootout just outside Gobbler’s Knob leaves two men in critical condition and the groundhog missing and presumed at-large.

Gmoser and Deeley agree to meet on a special edition of Nancy Grace in an attempt to discuss the matter in a civil fashion. This goes poorly. By the following morning Internet forums have become sharply divided between Free Phil and Fry Phil camps. Entrepreneurs begin selling earth-toned T-shirts through CafePress for $20 apiece and a conservative meme that groundhog shadows are the direct result of Obamacare begins to take hold in the popular subconscious. A rash of vicious assaults on unrelated ferrets prompts The White House to issue several appeals for calm.

Phil, or a groundhog that looks close enough to Phil, is eventually apprehended and brought to trial in Butler County. Protesters stand outside the courthouse shoulder-to-shoulder with cameramen who last week had been assigned to cover the continuing cycle of poverty and violence in urban areas. Legal analysts decry the way that the groundhog’s trial has become a circus, mentioning that people will be able to read all about how the trial became a circus in their forthcoming book Circus: How The Trial of Punxsutawney Phil Became One and Eight Ways We Can Make It More Like a Craft Fair Instead.

And it doesn’t matter how the trial ends. The trial was never about the verdict, the trial was about America’s ability to follow the procedures of determining a crime and assigning that crime a culprit, then letting momentum carry us downstream to the rushing waterfall of our own satisfaction.

But that was an alternate America.

In this America, we tell a joke that an immortal groundhog is responsible for the weather, and then we laugh at the joke. And we don’t make too much out of the fact that a conservative Republican prosecutor in a district that went 62% for Romney would sooner prosecute that groundhog for fraud than admit that maybe there’s something to climate change after all. Not in this America.

This entry was posted on April 5, 2013 by bilaldardai in Fiction, Paper Machete, Performance.