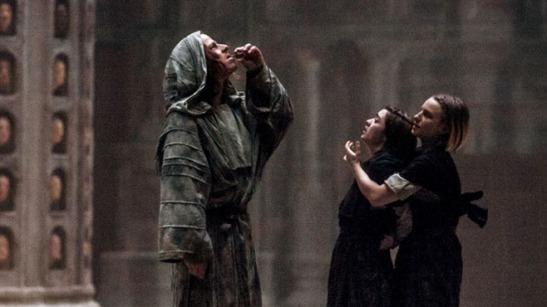 With regards to Arya Stark, apostate acolyte within the House of Black and White.

Arya Stark’s choice to defy the Faceless Men for a final time has turned out the be the culmination of a very long and subtly crafted story about how young people become involved in violent extremism, and the ingenious part is that Martin, facilitated by show creators Benioff & Weiss, has told this story in a way that we the audience were somewhat seduced as well.

When Arya first meets Jaqen H’ghar, she has been on the run for weeks, and has lost nearly everything — her father, her sister, her mentor Syrio Forel, Night’s Watch protector Yoren, her friend Lommy — to the Lannisters. She finds herself living and serving in Harrenhal beneath the patriarch of that same House, doing her very best not to be found out and seized as a hostage. She has every right to a white-hot hate but little knowledge and less power regarding how to channel that into action. She knows who she wants dead but no means to make it happen.

But now here’s this enigmatic and clever man with his unusual behaviors and cadences who not only sets himself up as an ally but who effortlessly vexes her enemies, helps her discover her own powers of manipulation and ruthlessness, and then suggests that she might have a gift for doing the superhuman things he can do.

Jaqen is Arya’s hero, and because we love Arya, he is our hero as well.

However, in every moment since Arya arrived at the doors of the House of Black and White we’ve been shown that for all of their magical powers and impressive fighting tricks, the Faceless Men are first and foremost religious zealots, whose principles rely on subjugating personal desires and identity while naming themselves the servants of a hungry Red God. Jaqen remains charismatic and spouts what feels like worldly wisdom regarding life and death, but all he is truly training her to do is learn how to kill coldly and indiscriminately. He has offered to empower her to go after her enemies as long as she is willing to take the lives of innocents as well.

Her rejection of that offer — and her decision to remain Arya Stark — is in its way a testament to her late father, who often spoke about violence and its relationship to justice. It would have been easy to sacrifice this Lady Crane on the altar of her hatred. She chose not to. She decided, perhaps, that avenging her family at the cost of the honor that family had worked to instill in her was a hollow victory.

Of course, one of the early lessons of Game of Thrones is that holding onto your honor is a good way to get yourself killed, and Jaqen has already dispatched The Waif to end the life of his former pupil. But one of the other lessons of this story has been that children can either repeat their parents’ mistakes, ignore them, or alter them to achieve a measure of success instead of failure.

I don’t think Arya Stark dies because of her honor. I think she finds the right amount of honor she can have and still come out of it alive.

This entry was posted on June 1, 2016 by bilaldardai in Critique, Game of Thrones, Television.