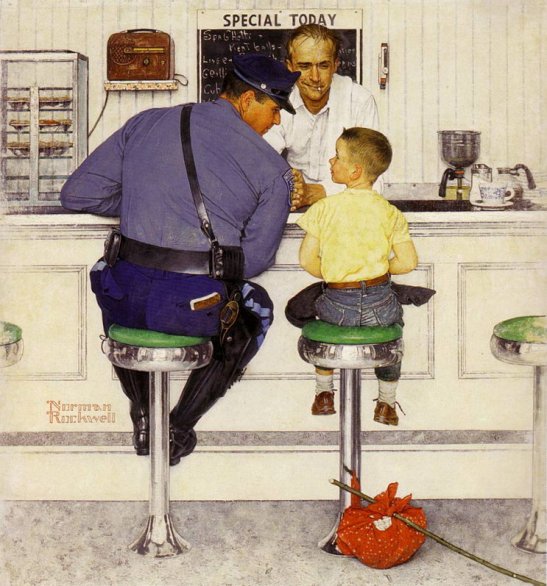 Then your wife tells you how yesterday at the playground a police officer introduced himself to the 5 year-olds and their parents, taking the time to let them know he was there to help keep watch and keep them safe. He let the kids see inside his police cruiser. You’re pleased to hear this story of community integration and engagement. Yes, more of this please. Keep finding ways to remove the barriers of fear and mistrust that continue to exist between ordinary citizens and those charged with protecting them.

Then your wife tells you that one of the children asked the officer about his baton and what it’s used for, and the officer responded, to the child, “This is for people who give me a bad attitude.”

This heavy, carefully designed, foreboding black bludgeon. “This is for people who give me a bad attitude.”

Another of these undefined law enforcement terms, such as “disorderly” or “threatening,” a gray area haphazardly tossed into this volatile chemistry, a word that each individual officer, whether discerning or not, temperamental or not, has been granted the power to interpret and respond to accordingly. “Attitude.”

Something that was expressed to a child, at an age when they’re still navigating the nuances of parental discipline and consequences, when some parents might use the word “attitude” to describe an unwillingness to eat asparagus, when the result of said attitude is the loss of dessert, not the possibility that one will be struck with a wooden baton.

One of the parents who witnessed this told me that another parent spoke to the officer afterwards about the inappropriateness of this, and that he seemed taken aback but open to listening. They noted that their own child was now asking if a cane they were playing with could be used on bad attitudes.

I don’t know if the attempt at community engagement was done by personal initiative or by some kind of internal department mandate. I’ll applaud the intention. I’ll insist that it can be done better. And I’ll observe that part of the improvement will come from an examination of how words like “attitude” might not be helping.

This entry was posted on July 15, 2016 by bilaldardai in Chicago, Fatherhood, Politics, Society.