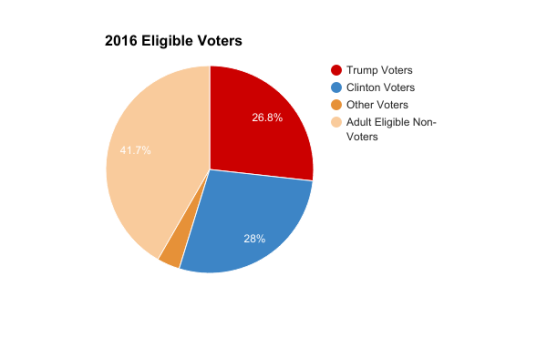 Do not let the narrative take hold that the country is divided in “half.” Half of the country bothered to vote; half of these voted for Donald Trump and everything he and Mike Pence represent.

The other half of the country looked at everything Trump and Pence represented and shrugged their shoulders. They let apathy and cynicism take precedence over pragmatism and strategy, and they stayed away from the polls entirely.

Today people don’t feel like “half” of their country voted against their welfare and safety; they feel like 75% of the country did so.

Imagine being one person in a room with three other people. One person tells you he’s going to beat the hell out of you, and the other two people in the room look at you and say “Not my problem. I’m sure he’ll stop before he kills you.”

This entry was posted on November 10, 2016 by bilaldardai in Action Items, Politics, Society.