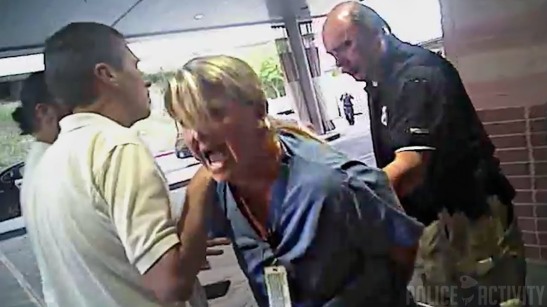 On the confrontation between nursing staff and a police detective taking place earlier today in Salt Lake City.

“We’ve looked at the actions that took place, the policies that could have prevented it, and the training that must be done. Within 24 hours of this incident, Salt Lake City Police Department took steps to ensure this will never happen again. We apologized for the incident and promised to find a solution. Additionally, our policy management team continues to work closely with the hospital staff on improved policies and training.”

Detective Jeff Payne has been removed from “blood draw” duties, but otherwise remains in the investigative unit at his current rank.

There are no law enforcement policies and training that the hospital staff need to be spending their time helping improve. They did absolutely nothing wrong. They are supported not only by the civic agreement Ms. Wubbels cited but also the FOURTH BLOODY AMENDMENT OF THE CONSTITUTION OF THE UNITED STATES.

SLCPD’s detective overstepped, overreacted, and traumatized a nurse because he was frustrated that he couldn’t simply use the power of his authority to get what he wanted. That’s not a behavior that only manifests on blood-draw duties. That behavior will occur the next time a suspect invokes their right to an attorney, or their right to not have their car, home, or person searched without expressed cause. That behavior has, I’d wager, happened before now, out of the sight of cameras, with greater force and brutality. I won’t assume that such behavior has occurred in his personal life as well but I can’t in good conscience discount it, either. And that’s the point: If you cannot trust the temperament of somebody wearing a badge, then you cannot trust the institution that the badge represents.

Yesterday, Cobb County, Georgia fired a police lieutenant who made a flip and ugly comment implying that they only shot black people, spoken to a motorist mere days after a Minnesota police officer murdered Philando Castile. Five days ago the interim police chief of Colbert, Oklahoma was forced to resign after it became clear that he’d fostered long connections with the American Neo-Nazi movement. A review of policies and training, and the restructuring of his responsibilities, is not going to solve the problem of Detective Jeff Payne.

Fire him, SLCPD. Fire him and fill his desk with somebody willing to abide by the laws they swear to uphold.

This entry was posted on September 1, 2017 by bilaldardai in Politics, Society.