On Reptiles and Rivers.

This essay was originally written and performed for Victory Gardens Theater as part of their event “REUNITE!” — a town hall-styled response to America’s current immigration policies.

I’m six or I’m seven or I’m eight, somewhere in that range, when I experience a moment of existential horror.

I’m at the airport, the O’Hare International Terminal, with my father. I’m holding onto his forearm as we walk through the crowds of darting, determined people. I let go of his arm for a moment, perhaps to scratch an itch, perhaps because my palm is sweaty, and when I reach back to grab his arm it’s not my father’s. The skin is pale and loose and flabby, like fresh dough between my fingers. I look up at a man who is not my father, who looks back down at me and tells me “Stop that.”

I couldn’t tell you exactly what my brain was doing within that shock moment. It may have cycled through several different possibilities at once and attempted to reconcile each of them, one at a time, in the span of a thunderclap. I have lost my father in the airport. Or: My father has spontaneously transformed into another man. Or: My father was always this strange man, but somehow I thought he looked and felt and smelled differently, and now he is also looking at me as if he doesn’t know who I am. Or: The entire world has changed around me, and in this world I have no father at all.

I cried out and stepped back and was briefly washed away in the ocean of airline travelers. I have no recollection of being reunited with my father. I know that it must have happened but I couldn’t tell you how. My memory was capable of cataloging the moment that my reality broke, but it set aside for recycling the moment that reality re-asserted itself.

Childhood is filled with instances like these, bizarre half-epiphanies and fractured lenses, a natural process of having your assumptions and illusions challenged or in some cases obliterated entirely. Your perceptions of what should and should not be evolve and guide your sense of how you navigate, they form the cartography of your identity. There is an added dimension to this when you are the child of immigrants, when you yourself are an immigrant by a technicality of having been born elsewhere 32 days earlier, in which you might find yourself contemplating how your status is not quite quo, in which you might ask yourself if it’s you that are different.

You will not realize you’re different at first. You’re just you at first, and the idea that you might be a them to somebody else is a higher step on the cognitive ladder, which is a few feet beneath the step where you learn that being them to somebody else can mean you are considered less than somebody else. There are a lot of ways to react to this; all of them are personal and none of them are wrong. I chose to respond to the recognition that others didn’t think I belonged here by working twice as hard to convince them otherwise, by learning more than I needed of America’s history and absorbing as much of its culture as could be made available. This is not an uncommon response for immigrants, and one of the consequences of that effort is that you can fall deeply in love with a nation’s narrative and its potential. You become invested in the idea that what you contribute makes this place better.

There is a man the color and character of a rotting fruit basket ensconced in the highest seat of office our country has to offer, and in between his rage-tweets and rounds of golf this man is fond of standing in front of crowds and telling them the fable of the frog and the scorpion. If you haven’t heard him tell the story because you’re tired of listening to his acrid, malevolent rasp then the short version is this: A scorpion asks a frog to ferry him across a river, and then halfway across the scorpion stings the frog, dooming them both to drown, confessing as they sink beneath the waters that “It’s my nature.” This story is told as a cautionary allegory about extending American generosity to immigrants, because if you trust them to rest on your back they will eventually drag you both down. “It’s their nature.”

There’s an older version of this story, from Arabian texts, in which the frog carries the scorpion across the river and nothing happens to the frog. When the scorpion gets across the river it attacks and kills a snake that was going to bite a man resting near the bank, and in this version the allegory is perhaps about how many disparate elements might come together, sometimes without even realizing it, to have a positive impact, to save life. This is not a version of the story you tell when your goal is to ladle out to the masses chunks of red meat from your scum-covered bigot broth stewpot.

There is another story, older still, and this is not a fable but a riddle. A father and son are walking by the side of a river, when the child is suddenly grabbed by a crocodile who was lying in wait within the murky waters. The father begs the crocodile to release his son, and the crocodile presents to the father this dilemma:

“Guess,” says the crocodile. “Guess what I will do next, and I will return your son to you.”

The man thinks for a moment, and then says to the crocodile: “You are going to keep my son.” 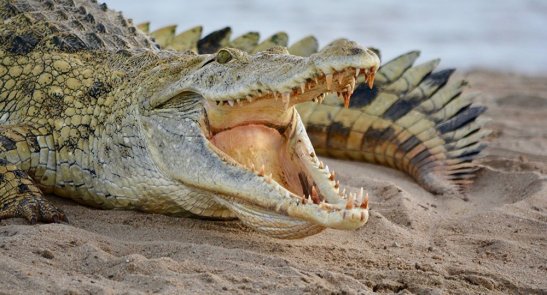 The storyteller smiles a mischievous grin at their audience. The father has created an impossible paradox, and now we shall never know what happened to him, his son, and the crocodile, as they have become trapped in a vortex outside the bounds of our logic.

Except there is another part of us that knows the truth, which is that the crocodile swam quickly away and devoured the child while the father screamed in anger and sorrow. We know this because the history of holding power is never to relinquish it easily, and that the ability to commit wanton cruelty is often considered a benefit of the position. The crocodile asked a riddle to amuse itself before doing what it had always intended to do. That’s what the crocodile does. For purposes of this riddle, this is the crocodile’s nature.

One morning you wake up to find that your country, the country you’ve dedicated yourself to for 40 years; one morning you wake up to realize that a population who had been convinced they were a benevolent frog has decided instead to be a sociopathic crocodile. And because you are also of that population, this shatters your perception of who you are into tiny shards; leaves you asking questions about why you’ve put so much of yourself into a place that can’t stop telling you it doesn’t want you, doesn’t need you, that you are taking up space and stealing opportunities that were never somebody else’s to lose.

This is the existential horror I experience when my own son is six, when it occurs to me that I may have accidentally bought real estate in the gaps between two rows of very sharp, jagged teeth. Over coffee in the hour after sunrise I’ll have conversations with my wife about situations that still seem very unlikely but which I used to believe were impossible, situations that end with my son reaching up for my forearm and discovering it’s no longer there. I know how easy it would be for me to keep my head down and my voice quiet; to hope that the ravenous beast that stalks the waters doesn’t notice me.

No matter what somebody else tries to tell me is their nature.

This entry was posted on July 19, 2018 by bilaldardai in Essay, Fatherhood, Performance, Politics, Writing.