It’s a late afternoon at Starved Rock State Park, which if you’ve never been is a gorgeous collection of trees and trails and cliffs and waterfalls. On this afternoon our son is five, which for him is an age when his body must feel like a newly manufactured Ferrari; he never seems to walk from one point to another as much as he peels out at top speed, reveling in the mechanics of his own muscles and joints. The pathways at Starved Rock wind for miles throughout the park, a network of stairs and bridges that incline hundreds of feet above the ground, many of them close to the edges and installed without guardrails. We keep telling our son that he needs to stay close, but he wrenches his hand away from ours and launches forward, unwilling to accept that he has anything to fear from either landscapes or gravity. 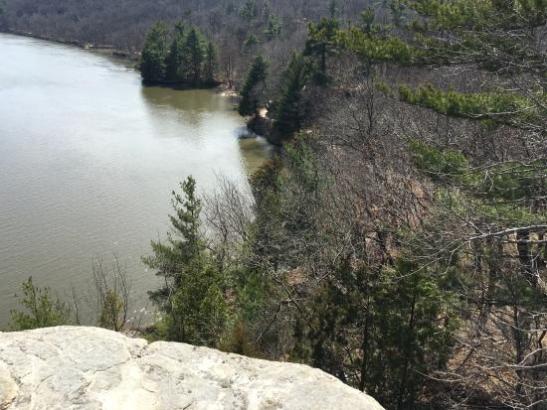 There is an aphorism that John F. Kennedy once spoke, and it has haunted me for the five years since I first read it. “Having a child is to give fate a hostage.” This is true and it is  horrible, and it’s made more horrible by realizing that as a hostage taker Fate is both constant and highly creative, that you must cultivate as much relentless imagination as FATE to counter every possible injury it could visit upon your child. It becomes the white noise of your adrenal gland, leaking into your bloodstream through blown, buzzing amplifiers. What if this, what if that, possible, probable, likely, definite. I can have entire weeks where I’m unable to write a sentence I don’t instantly delete and this mass of exploding electro-chemicals in my skull could still concoct, in exquisite, lyrical prose, five scenarios that end with the death of my son.

I am asking you to understand this about me, about how I engage with the world’s capacity for harming my child, because despite this, despite my finely carved sense of catastrophe, there is still a sliver of my being that cannot believe what is happening at our southern border is real. The entire situation has been grown in a clay jar filled with soil and madness; produced a bloom of such monstrosity that its stench alone sets corpse flowers to weeping. It confounds one’s logic centers to even exist in the same space as such eldritch horticulture, within the desolate overlap of the Venn diagram between the limits of cruelty and the willingness to commit same.

Nobody can say they didn’t know how this would proceed. The abiding ambiguity might be whether or not they cared, and that is a debate to be settled between themselves and their deathbeds, but there is not a single person who can credibly claim they saw anything on the other side of this policy but misery, because roads to hell can be paved just as smoothly with bad intentions, and nothing about locking children in cages while misplacing their parents hundreds of miles away can be considered anything else.

They knew that they were perpetrating further trauma upon already traumatized people, they knew they were feeding the powerless into an engine rampant with potential for abuse, and they knew from the very outset that some of the families they separated would never see each other again. That the ones who saw each other again would be forced to recover from the grievous wounds that the experience had inflicted upon them.

They knew since this was the aim of the policy: To take people who were escaping the likelihood of murder and convince them that we could provide fates much worse than that. From behind heavy oak tables and live microphones the archfiends of our festering cabal refer to this as deterrence. They knew.

And yet: That sliver of incomprehension within me that this is happening at all, the notion that maybe there’s still a chance I could just wake up screaming from it, that’s the part of me that asks if they knew a child could die because of the policy. This should never have been a thread we needed to tug on, except we have accounts, from earlier this week, that a migrant child who had been held in a government facility is dead now.

So much about this development is currently shrouded in the pea-soup stormfront of outrage and desperate spin, which compounds a tragedy on top of an accusation in such a haphazard way that it threatens to twist the narrative into unconscionable farce. The first note of the clarion call is a social media post by a Washington attorney who claims that the granddaughter of a friend has died in the holding facility at Dilley, Texas, 80-odd miles from the Mexican border. This signal is boosted by another attorney in Houston, who turns the first attorney’s post into a series of tweets, which are disseminated far and wide in both their initial forms and as sloppily designed photo images, building to a loud enough crescendo that they must at last be fiercely contradicted by government representatives.

There is no record of a child dying in the facility at Dilley, Texas, they insist, which is followed by a clarification that the child may have died shortly after leaving the facility of Dilley, Texas. This transitions to a different semantical battlefield as one side claims the conditions of detention led to a respiratory infection that killed the child, while the other side argues that conditions in the facilities are akin to a summer camp, and the key point here is that the child who died, that is to say if the child died, that is to say if the child existed at all, the important point is that whatever happened happened outside of custody, the sort of legal hair-splitting that advocates my client can’t be guilty of homicide, your honor, because the poison they fed to the victim didn’t kill him until several days later. By the time the original story has made its way out to the journalistic wastelands of the ThinkProgress comment sections and Refinery29, the grandmother has died as well, and whatever the truth of the story might be has been relegated to bluffs and tells and walls made of the details that cannot be further provided.

If there was one story you would hope a civil society could take seriously enough to report accurately it would be a story about the death of a child. But ours is also a society where we have expended significant effort constructing platforms from which people may argue that vaccinations are mind control and hallways filled with dead grade schoolers have been staged for political purposes. Instead we are left with grinning, insolent question marks where the exclamation points should be. Did the Trump regime know that their horrorshow immigration policies could lead to the death of a child?

It doesn’t matter. It’s not nearly as damning a question as whether it would have stopped them anyway, and the answer to that question is No. It wouldn’t have.

The vicious little secret of the policy is that deterrence isn’t even its primary agenda: Its primary agenda is to perpetuate the same myths about outsiders that have served forever as the fuel for hatred and social dominance. The policy is in place to tell American citizens that there is something fundamentally inhuman and uncaring about the families that are being separated, because if they loved their children as much as we love ours they would never have subjected those children to our immigration policies. And years from now, when these children continue to feel the twitch of their incarceration scars — if they are having trouble in school, if they are having trouble with crime, if they are disconnected and disengaged from their families — you will watch as the bloated, moldy ball of dough that is Sean Hannity smirks through yet another broadcast in which he asks if the reason so many of these children come from broken homes is due to a kind of cultural deficiency.

They know what they are doing. They know. They are throwing children off the side of a mountain and laughing at those of us who scramble to grab ahold of their hands, and there are millions of us who voted for this in the first place and millions of us who can’t wait to vote for it at the next available opportunity and while it is unclear if a child has died this week we know that we have attempted to murder something inside them and to murder something inside ourselves at the exact same time. And I’m sorry.

This entry was posted on August 4, 2018 by bilaldardai in Essay, Fatherhood, Paper Machete, Performance, Politics, Writing.