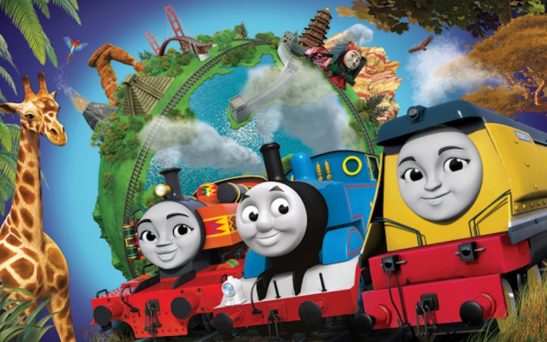 On the surface of it, this story looks like it’s merely laughable, another moment of the NRA’s most visible majordomo speaking aloud a perspective so ridiculous it’s hard to even get angry with it. But consider carefully what Dana Loesch is doing in this segment with her time and her FSB-supported paycheck.

Start with a very simple question: What does gender and ethnic diversity in a kid’s cartoon show have to do with the right to keep and bear firearms?

The obvious answer is “nothing.”

Follow-up question: Then why is NRATV devoting airtime to this report?

It’s easy to focus on the nonsense of the Klan hoods, but it’s important to read the commentary Loesch provides to supplement the imagery.

Thomas the Tank is now bringing gender balance to the show by adding girl trains. Seriously. One of those trains, Nia, will be from Kenya to add ethnic diversity to the show. And — which that by the way, that’s where it gets really strange to me because I’ve looked at Thomas and Friends, at their pictures, and I see gray and blue. Am I to understand this entire time that Thomas and his trains were white? Because they all have gray faces. How do you bring ethnic diversity? I mean they had to paint, what I guess they thought was some sort of African pattern on the side of Nia’s engine? How do you bring ethnic diversity to a show that literally has no ethnicities because they’re trains. They don’t even have skin pigmentation. Where — was there some concern that the show had racist undertones? Because, Sir Topham Hatt clearly is white, but the trains? I mean, I’m looking at this picture and I’m really, really struggling to understand how in the world there isn’t any diversity in any of this. Oh, was it because, I see it. It was the white hoods. And the burning train tracks. OK, fine, fair point. Fair. I get it. Thomas the Tank Engine has been a blight on race relations for far too long. Clearly this is overdue. Right?

The hoods doctored into the imagery are in service of the sarcasm, describing how a children’s show about trains has fallen prey to unwarranted political correctness1. She pleads ignorance of any racial or ethnic construction within the structure of the show, and while she might indeed be ignorant for this specific program it stretches some belief that she is ignorant of how one can build diversity in anthropomorphic ensembles using vocal cues or other techniques.

They’re trains, Loesch scoffs. Trains don’t have identities! They’re trains! Looks like the liberals have ruined this harmless childhood standby just like they ruined so much else that didn’t seem to bother anybody when Ike was president.

Loesch and the NRA are here leveraging undercurrents of racist backlash against more diverse representation in the arts and media, a backlash that one cannot walk two clicks into the internet without tripping over. You find pulsating boils of it within nearly every type of fandom; the pouting, the abuse, the cries that Pursuits Traditionally Belonging To White Men Are Being Stolen From Us. Look at what they’ve done to Star Wars, and Marvel Comics, and video gaming, and science fiction novels, and golf, and tennis.

Always keep in mind: The modern NRA is not, despite its insistence to the contrary, an advocacy group or educational entity. It is a marketing apparatus. It works night and day to not only sell the physical instruments of weapons manufacturers, but to instill in the customer base a higher demand for the product. One of their most reliable narrative seedlings is the poisonous cultivar of perpetual insecurity, that at any given moment you will be faced with a criminal who has come to do you harm and take your stuff. Oh, we’re not outright saying that they’ll be people of color, much less that they might be undocumented or refugees, but something something statistics show, and I’m certain you’d feel much safer in the cold embrace of my associates Mr. Smith and Mr. Wesson.

This is how you nurture a society in which people shoot their own family members dead for coming home late at night to their darkened house, as well as a society in which a Dallas police officer would first assume that she’d encountered a black man burglarizing her apartment than to take the five seconds required to realize she’d walked through the wrong door.

The NRA is upset about an animated train with an African pattern painted on its side because when you introduce children to a social worldview in which a multitude of different types of people exist harmoniously it becomes harder to sell those different types of people as assumed assailants in the future. That’s why Dana Loesch is delivering this segment. One cannot simply laugh at her over it, once that agenda becomes evident.

1 Although there are, truly, very strong arguments to be made against the colonialist and Calvinist doctrines that formed the foundations of the island of Sodor. I’m not going to make them here, and others on the web have done a much better job of it. Go forth, and Google be thy guide.

This entry was posted on September 11, 2018 by bilaldardai in Essay, Politics, Society, Television.