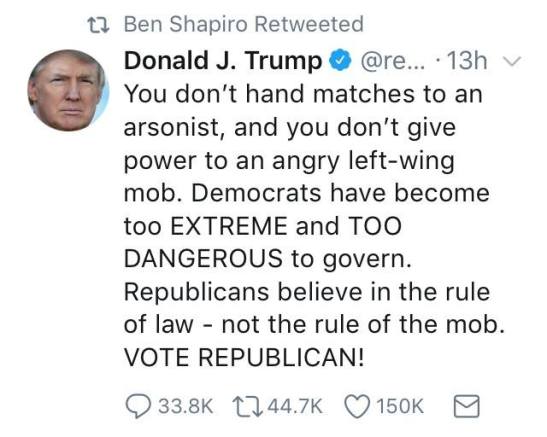 I’ve been thinking about this tweet all day. Some minutes I’m very concerned by it and in others I’m straight-up terrified. The lever that Trump is pulling with his tiny, greasy hands was manufactured and then imported directly from 1933 Germany.

I’m not being dramatic. I’m being specific.

It’s exhausting to say repeatedly that the Holocaust did not happen all at once, but it needs to be said repeatedly because America is currently in a state of nascent fascism, and waiting to recognize the patterns in play until after your neighbors have been dragged from their homes by armed officers and made to disappear is far too late. (And also, some of your neighbors have already been dragged from their homes by armed officers and made to disappear. You may not have realized they were your neighbors because you were told that they were “illegal.”) Consolidating total power in a country that fancies itself a democracy requires the power-seeker to tell enough people a story enough times that it becomes convincing enough to accept as status quo. In 1933 Germany, the story was not only that the free press, the Communist Party, and the Social Democratic Party were enemies of the people, but that the plurality of the nation was already aligned with Nazi ideology.

When the Reichstag burned in February 1933, Rudolf Diels — the future head of the Gestapo — claimed that Hitler had stood near the flames and shouted:

“These sub-humans do not understand how the people stand at our side. In their mouse-holes, out of which they now want to come, of course they hear nothing of the cheering of the masses.”

Setting aside the dubious accusation that Communists had set the fire in the first place, it was not enough simply to characterize them as a group that had gone too far in this one instance. They instead released an official account of the incident that included the text:

“The burning of the Reichstag was intended to be the signal for a bloody uprising and civil war. Large-scale pillaging in Berlin was planned for as early as four o’clock in the morning on Tuesday. It has been determined that starting today throughout Germany acts of terrorism were to begin against prominent individuals, against private property, against the lives and safety of the peaceful population, and general civil war was to be unleashed.”

Within hours prominent Communists were in prison, within days legal edicts had been drafted to justify the arrests, within the year all opposition parties had been rendered illegal under the pretext of the Nazi regime’s right to act in the interests of public security and welfare.

Whether consciously or unconsciously, Trump using the phrase “you don’t hand matches to an arsonist” as an evocation is alarming.

This entry was posted on October 7, 2018 by bilaldardai in History, Politics, Society.