The Recommendation List is a collection of art and media that I experienced for the first time in the month prior, and which I expect to either inform my future projects or that had at least one element that sticks with me. These posts are exclusive to my Patreon subscribers for three months, and then posted to the Creative Control blog for posterity after that period. Comments along the line of “If you like X, you need to check out Y” are appreciated.

Oscar-winning screenwriter and filmmaker John Ridley (12 Years A Slave) wrote and published The American Way in 2006 for WildStorm Comics, and a tenth-anniversary collection of both this and its 2017 follow-up series showed up on the shelves of my local library last month. I was floored by both the world building and the astute social commentary. The events of both series follow a large group of super-powered beings in America within the 1950s – 1970s and delves deep into the characters in ways that recall both Alan Moore’s Watchmen and Kurt Busiek’s Astro City, but with its own unique eye for the ways governments conspire to create patriotic narratives, and the damage caused by the racial rifts that were omnipresent during the fight for equal rights. 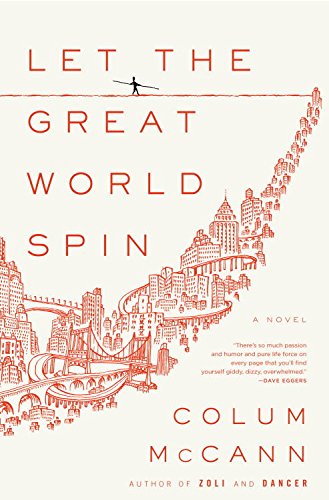 A deeply moving and human work of fiction, and a winner of the National Book Award, Let The Great World Spin places at its center the famous 1974 World Trade Center tightrope walk of Phillippe Petit. However, while the book spends one of its interconnected short stories depicting Petit’s mental and physical preparation leading into the feat, the novel is not aboutthe feat, but moreso about the imagined New Yorkers who lived below or nearby, looking up as he defied both gravity and municipal law. In its series of interconnected short stories, McCann leaps nimbly from mean street to penthouse, across continents and generations, into the minds and hearts of people hurt by war or injustice or simply by the slow bleeding away of hope. You grow to love each of these people in their pain and their transcendence, and when McCann  stops the narrative in mid-2006, you want desperately to dive back in, scan the years back to the beginning, and find new moments that he kept from you simply by choosing not to invent them in the first place. 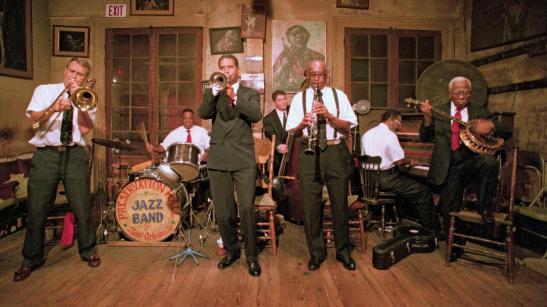 I was fortunate to take in a healthy sampling of the local music during the four days I spent in New Orleans last week. Besides the nomad groups of musicians wandering the streets of the French Quarter, I also enjoyed a set from the Smoking Time Jazz Club at the Allways Lounge; and both traditional and blues-styled jazz outfits at the Spotted Cat and Apple Barrel on Frenchmen Street. (If you’ve never been to New Orleans, walk up Bourbon once just to understand why you don’t need to linger, and then go find Frenchmen Street instead.) Of these musical experiences, however, I can’t recommend enough standing in line with $20 cash outside of Preservation Hall and then experiencing what feels like a quintessential ritual that one could only find in this city. The room and the artists are filled with both energy and history, and you walk out feeling joy at being alive. 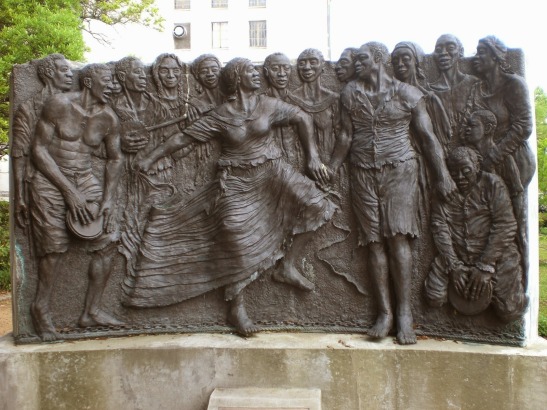 Like many major southern cities, New Orleans would be remiss if it did not examine its role in America’s slave trading past. To the city’s credit, there is quite a bit of signage or other landmarks that attempt to reckon with those sins by refusing to let either locals or tourists forget them. This historical frieze is located in Congo Square, the space where both enslaved and free black people were allowed to congregate once per week to express themselves spiritually and artistically. The monument itself succeeds in how it chooses to capture the wide, complicated breadth of emotions that could exist in a people given a momentary reprieve from their bondage. There are both smiles and solemnity in these faces, wide grins and ragged scars. While the tragedy of their circumstances is only a few feet away from this space, they dance and sway, they refuse to lie down, they choose to keep living. The woman at the center of the image is literally stomping on a line of chains, an act of defiance that continues to echo through America today.

Extra mention: If you’re not watching the new series of Doctor Who featuring Jodie Whittaker as The Doctor’s latest incarnation, you’re missing out on a lot of fun, old-school styled Who that now also takes the time to create dimensions and pathos for the titular heroine’s companions. The series is only four episodes old, but I was especially taken with Malorie Blackman and Chris Chibnall’s “Rosa,” for which I wrote an appreciation post.

This entry was posted on October 31, 2018 by bilaldardai in Books, Comic Books, Music, Recommendation List, Sculpture.