The size of a lie. 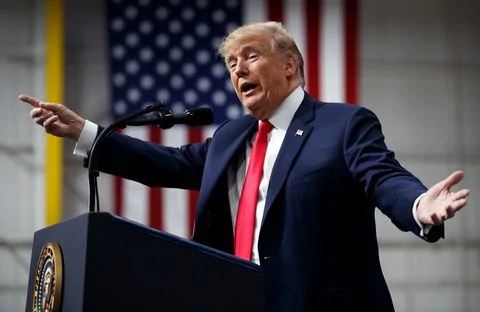 Trump’s statements on the southern border follow the exact same pattern as his statements about his businesses, his intellectual prowess, his golf game, his sexual exploits, and whatever else he decides is most important for him to be talking about as loudly as possible. They begin at a baseline of hyperbole and move from there into absurdity, and if they can find a path to sheer lunacy they’ll dash towards it full steam.

At the current rate of escalation, by the end of the month the president THE PRESIDENT FOR GODSAKES will be telling us that the crisis at the southern border involves a million-strong horde of ten foot-tall cyborg migrant soldiers, each of them carrying high-tech nuclear weaponry the likes of which have never before been seen by mortals, charging forth on the backs of radioactive elephants and acid-spitting dragonflies. They are mercilessly transforming the border towns into vast killing fields and planting their eggs in the newly salted soil, each of which will hatch a fully grown socialist anti-Christ capable of plunging the NASDAQ into the depths of hell at a mere thought and stealing your job from you with one hand tied behind their back and one knee on the ground during the national anthem. They will take advantage of our missing concrete walls to roll entire mountains at us like monstrous duckpin bowlers and capitalize on our lacking Space Force to command meteors rain upon us, just like how they killed the dinosaurs, do you want to tell your children that you are responsible for killing the dinosaurs because if you don’t build the wall that’s what you will have done. The migrants are zombie vampires, the migrants are time-traveling genocidal barbarians, the migrants have caused the hurricanes and wildfires with their doomsday devices which is why we need to use the emergency money to fight back against them.

We are now being ruled by Michael Bay’s amphetamine-fueled, genetically altered evil twin and I can’t understand why so many of my fellow citizens keep buying tickets to his movies.

This entry was posted on January 11, 2019 by bilaldardai in Politics, Satire, Society.