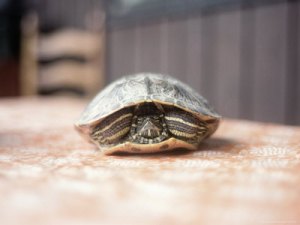 My friend Bryan, who spent two years of his life assisting Jeff Daniels at the Purple Rose Theatre in Chelsea, Michigan, once told me an amusing anecdote about Lanford Wilson, the Pulitzer Prize-winning author of such tour de force works of drama as “Balm in Gilead,” “The Rimers of Eldritch,” and “Burn This.” Evidently, Wilson cannot stand to see his own plays. When attending a performance of any production, no matter how good, he will sit in the back row, slowly pulling his shirt collar over his eyes, muttering “Oh God,” over and over again. Lanford Wilson is an old man. He has been doing this for decades.

Monday will be the first time I’ve had a staged reading of a longer work (that longer work being only my second) and there are only two rows in the theater, so I don’t know how I can hide in the back, especially since I have much more reason to disappear than Lanford Wilson. I think “The Accident God” might be a good play, but I can no longer tell, because I’m sick of writing and re-writing it. I feel like there’s a small point at which the play will be just perfect, and I keep overshooting that point every time I try to compensate for litte problems here and there. Now I’ve gone too far left. Now I’ve gone too far right. Now this character is underwritten, but writing more lengthens an already slightly overlong play.

I think right now, I don’t want simple suggestions, I want somebody to tell me what to write. Which isn’t really what I want, but I’m tired of this frustration. Monday will come around and go away, and I’ll have a small pile of questionnaires/critiques to go through and cry over. I shouldn’t be feeling this sick three days in advance, but I do.

I always say that I need a new job, but I think this time I have little to no choice. My employer has created a new position to be filled in the coming weeks, and one of their responsibilities will be photo research–which is, at this point, nearly sixty percent of what I do around here, give or take. I don’t know if this means my head’s on the chopping block, but at times it feels like I don’t have much work to do at all, and with my photo research duties taken away, the time will begin to crawl–and this would ultimately lead to aforementioned chopping block.

We have now entered November, meaning that I have approximately a month of nervous anticipation while I wait for news about the ABC/Disney fellowship. If no such response comes, I may have a very glum December. I’m already all kinds of worried because I did two things really, really wrong.

1) I addressed the mailing to ABC/Disney, when the website asked me to send it to ABC/Touchstone.
2) The play I sent, I discovered later, was missing three words from the end of one line of dialogue. I don’t know how it happened. But it did.

I don’t think I’m going to get it. I’m already depressed about it. Not depressed so much as cynical. I’m only twenty-five and I’m not yet ready to admit failure.

Question to ponder: If you are aware that you are desensitized to violence, how can you really remain desensitized?

This entry was posted on November 1, 2002 by bilaldardai in Plays, Theatre, Work, Writing.