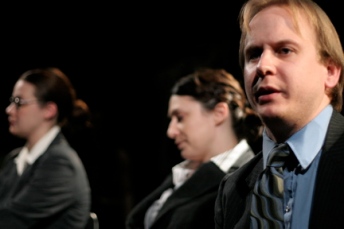 The cast and crew of New Leaf’s The Permanent Way had a stellar and emotional final weekend of performances, and now that it’s over I’m finding that the experience lingers, in the best possible way, like a glossy sheen on individual brain cells. Like a song you want stuck in your head forever. I keep hearing internal echoes of line readings, of sound cues; I keep smiling when I think of our time onstage together. My mind skims through a mental catalog of the show, and in this dull gray Monday morning, sitting yet again in this spirit-crushing cubicle, I take subtle retreats into the glowing pinhole sunbeams of individual moment memory:

– The way that Erin always, always broke your heart when she despaired of “the value of Sam.”

– The subtle yet powerful shift in Dominic’s voice when the British Transport Policeman decides he’s going to take charge of the Southall investigation.

– How Kyra managed to turn throwaway exclamations like “Jeepers” and “Yippee” into thumbnail sketches of a character’s entire personal philosophy.

– The comic desperation of Jonathan’s face as his High Powered Treasury Thinker tried to conjure reasonable responses to difficult accusations.

– Marsha’s Bereaved Widow, constantly holding onto one arm like a broken wing that never fully healed, the lower register of her voice fully eradicating the line between physical and emotional pain.

– Brandon’s capacity to evoke both sympathy and outrage–often in subsequent sentences–as he related, with disarming sincerity, the most egregious cockups of his character’s railway management.

– The slow rise Dana made from her seat as she walked into the light to confront the disembodiment of John Prescott, a moment that was composed almost entirely of spine and steel.

– Ehren fiddling with a small biscuit as his Young Man in Denim talked about the scope of the disaster, and the way he simply let it fall as the realization hit.

That’s just a sample, of course–part of what made the storytelling work so well was the commitment and stamina of the ensemble throughout the nearly two-hour, intermission-less show. When Greg saw the show on Thursday, he commented that The Permanent Way was remarkable for all the ways it easily could have been terrible theatre–the script itself reads as very little more than 75 pages of talking heads and agony, and yet Brandon’s direction and the instincts of the actors managed to keep it fluid and compelling for the duration of the performance. The play doesn’t have much “red meat” for actors–there’s no major histrionics called for, no real stage combat, nothing of the sort that normally makes a critic comment on the “bravery” of the performance (which is, to be honest, usually a shorthand way of saying “I can’t believe they were willing to do that1 onstage”). What it does have is an overwhelming humanity and wealth of common experience between character and audience, and what it had working for those components was an astonishingly talented team of artists determined to create something truly special. And they did.

Sometime in the next week I’ll go ahead and update my actor’s resume to include this production, and it doesn’t, right now, seem enough. Where I am right now, in this cyclone of pride and sadness, I almost want it inscribed on my tombstone, and I’m only mostly against the idea of having to die to get it done.

Onto the next project; Vox Pandora starts officially rehearsing on Wednesday, I’m back in Too Much Light as of tomorrow, and the research and writing for Contraption needs to start happening in earnest. But for today, for awhile, I’m going to be still on this island, looking at the sand castle built on the shoreline and smiling quietly as the ocean takes it away.